The G-Bull is one of the different combinations of the RX-78-2 Gundam and the G-Fighter in Mobile Suit Gundam.

The G-Bull is formed by combining the FF-X7 Core Fighter with the upper body of the Gundam (after the abdominal armor has been removed) and the A-Parts of the G-Fighter. The G-Bull serves as a heavy tank for ground combat and has high mobility on land. The G-Bull's high generator output due to linking with the Gundam and its powerful beam cannons make it a formidable foe. However, its weight means that it cannot be operated on some types of terrain. Unlike the other configurations of the G-Fighter, the G-Bull is driven from the Gundam's cockpit. Because the bottom of the Core Fighter and the arms of the Gundam are exposed, two of the Gundam's shields were mounted on its arms to protect both sides of the G-Bull.

The G-Bull's main armament is a pair of experimental beam cannons mounted on the top of the A-Parts. It used E-cap technology like the Gundam's beam rifle, but was much more powerful. The number of shots it could fire was increased when combined with the Gundam, as the G-Fighter's own generator could be linked to the Gundam's and operate together.

A retractable 2-tube missile launcher was mounted on the underside of the A-Parts' nose.

One of the Gundam's shields was mounted on each forearm. Weighing 10 tons, it was a simplification of the armor structure on the Gundam's body and was designed for shock diffusion and absorption rather than robustness. It featured a triple honeycomb structure, with a high-density ceramic material based on super-hard steel alloy sandwiched between aramid fibers and an outermost layer made of luna titanium alloy. The surface of the shield was filled with a resin made of a polymer material for improved elasticity.

A miniaturized version of a mega particle cannon with an output of 1.9 megawatts, the Gundam's revolutionary beam rifle could optionally be held in its hand and fired when combined into the G-Bull. The beam rifle employed the the Federation's energy capacitor, or E-cap, technology and used charged concentrations of Minovsky particles as ammunition. The resulting weapon had power equivalent to that of a battleship's main gun at the time of the One Year War, allowing it to defeat a mobile suit with a single shot. The rifle can fire 12-15 shots when fully charged. It also featured an offset, movable sensor that interfaced with the RX-78’s Fire Control System (FCS) to achieve a high degree of accuracy, as well as a foregrip for firing support. 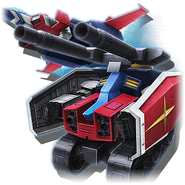 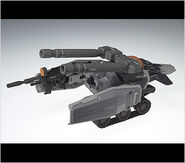