The G-838 Mahiroo is a mobile suit that appeared in the anime series ∀ Gundam.

The G-838 Mahiroo is the mainstay mobile suit of the Gingham fleet. The Mahiroo is equipped with a Mobile Trace system and uses artificial muscle fibers in its drive system. Powerful thrusters give the Mahiroo high mobility and atmospheric flight capabilities. The Toroidal Shield is armed with a powerful mega particle gun.

Many Mahiroos were used in the later days of the war, most famously by the obese pilot Sweatson Stero. 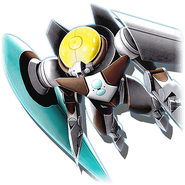 Retrieved from "https://gundam.fandom.com/wiki/G-838_Mahiroo?oldid=497895"
Community content is available under CC-BY-SA unless otherwise noted.