Fumina Hoshino (ホシノ・フミナ, Hoshino Fumina?) is one of the main characters in Gundam Build Fighters Try. She is the leader of team Try Fighters, being the president of the Seiho Academy Gunpla Battle Club.

Fumina is a very caring person. This is however her weakness in Gunpla Battle, as she prioritizes helping her teammates. Fumina has a strong drive to accomplish her goals, but also believes in the value of teamwork. She is also a very capable tactician, often directing her teammates in the battlefield.

At school Fumina is the target of affection for many male students thanks to her looks and personality. She however holds feelings for Sekai Kamiki, and has shown jealously on many occasions where other girls displayed affection for him.

Throughout the series she has worn different clothing but her primary outfit consists a yellow jacket (that is usually open), a black, pink, and white sports bra (that exposes her midriff), and similarly colored bike shorts and shoes. She also wears a blue bracelet along with a pink ponytail ring. Later on, her outfit became somewhat less revealing as she wore a pink long sleeved shirt with white shorts and long socks. She retained her bracelet and ponytail ring. Long after their victory at the national tournament, she reverts to her original look.[1] Her hair is sand blonde and her eyes are blue.

She and Yuuma Kousaka were best friends and used to build Gunpla together. They both had the same dream of competing in the World Championship, and made a promise to fight in it together.

She was the sole member of the Gunpla Battle Club after her seniors graduated and all other members moved to the Plastic Model Club. Her passion for Gunpla Battle leads her to seek more members in order to participate in the under-19 division of the national tournament. After she enters the tournament with Sekai and Yuuma, she replaces her Powered GM Cardigan with the Winning Gundam. She built her Winning Gundam to make the Try Fighters work together better by making her Gunpla dock with Yuuma and Sekai's Gundams which even impressed Yuuma's rival Gunpla Builder Minato Sakai. 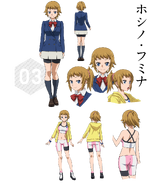 Hoshino in the anime's first opening.

Hoshino in the anime's first opening. 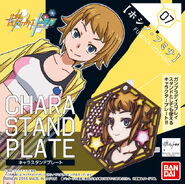