The Freeden, a ship of the Alps-class, is a land battleship which appears in the series After War Gundam X.

Aside from land, the Freeden is also capable of moving over water bodies. The only armament of the ship is a twin cannon. Since it is a weak weapon, the ship is mainly protected by its Mobile Suit complement, especially its Gundam-type units. The hangar is located at the back of the ship and Mobile Suits are deployed from the the two launch hatches at the rear. The ship also has a large cargo bay on its right side.

A 2-barrel beam cannon mounted on the front, it is the Freeden's only offensive weapon.

After the apocalyptic 7th Space War, a new group of humans arose: the Vultures, who search the land of the damaged Earth for technology they can sell. For this reason most groups of Vultures rely on land battleships, among them the Alps class of which the Freeden is a part of. The ship is commanded by former United Nations Earth pilot Jamil Neate and served as the main transport vessel and home for him and his crew. Although the group acts like other Vultures, Jamil also has another, more noble goal: find Newtypes and protect them from people who want to misuse their powers.

In April of AW 0015 the crew had a first success in rescuing 15-year-old girl Tiffa Adill from the Alternative Company. This action set in motion a chain of events, that caused three pilots and their Gundams to join Jamil's crew: Roybea Loy and his GT-9600 Gundam Leopard, Witz Sou with his GW-9800 Gundam Airmaster and lastly Garrod Ran and his newly acquired GX-9900 Gundam X. Together and often under the guidance of Tiffa's powers the crew continued their journey. They however soon came into contact with the newly formed New United Nations Earth, which they fought several times.

The Freeden was finally destroyed when the ship was set on a collision course with the massive New UNE land fortress Bandaal. 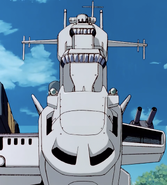 The Freeden under the sunset (Gundam Perfect File) 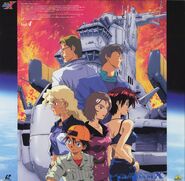