When Fram transferred to Zeheart Galette's forces, her main objective to deduce whether Zeheart is worthy and able Vagan commander. The reason behind Fram's evaluation of Zeheart is due to the fact that she is the sister of the late Dole Frost, who sacrificed his life for Zeheart's cause (by shielding his xvm-zgc Zeydra during atmospheric re-entry and perishing in the process in A.G. 141). Because of her brother's death, she somewhat resents Zeheart at first. Furthermore, she is determined to kill him if he doesn’t prove worthy of her brother's sacrifice.

Fram warms up to Zeheart after witnessing first hand that Zeheart is a caring and able commander who cares for every soldier under his command and doesn't treat them as disposable tools.

After this change of heart, Fram becomes much more willing to aid his cause and even die for him, much like her brother before her. She is shown often worrying about Zeheart’s safety as seen in the Luna Base battle where she insists on deploying alongside him.

She eventually becomes romantically interested in Zeheart after acknowledging that he is a caring commander and person.

Fram is a very skilled tracker, as mentioned by Godom Dynam, being able to track the Diva in the Sargasso debris field. Fram also appears to be a competent commander, as seen when Zeheart Galette noted that her covering fire from the Fa Zard was effective.

Fram is a capable pilot, although she has admitted that she is not a very experienced pilot. Fram makes up for her lack of experience with her X-Rounder abilities, being able to fight evenly with Gundam AGE-FX in her less advanced Xvb-fnc Fawn Farsia.

A female officer transferred in A.G. 164 from Second Moon under the orders of Zanald Beihart to spy on Zeheart Galette (under the pretense of assisting him), following the defeat at Rostroulan. Zeheart merely stated that he didn’t need any help before walking out, leaving Fram alone. She wondered then how much of a man he would prove to be.

After the Diva launched in space, Fram reported to Zeheart that they were unable to pinpoint the Diva’s location, but she should leave everything to her since she was putting a plan in motion. Before leaving, Zeheart stated that she had better prove herself useful now that she was working for him. Her response was that she wouldn’t disappoint him. Upon exiting, Fram looked at a memento of her brother and stated that she would kill Zeheart herself, if he wasn’t worthy of her brother’s sacrifice. Following the operation’s failure, Fram reported to Zanald about it, only to be told that she needn’t concern herself and that her primary mission was still to observe Zeheart’s actions. After signing off, Fram stated that her goal was a bit different than that. She, then, apologized to Zeheart for the operation’s failure and promised to become a better commander, only to be interrupted by him, who asked her if she knew the names of the dead pilots. Surprised, she answered that she didn’t. Zeheart recited them and asked her to remember them.

Some time later, Fram called Zeheart to attend the briefing of their new joint operation with Zanald: the Gundam’s capture. Following the briefing’s end, Zeheart informed her and Leil Light that they had received new orders from Lord Ezelcant. Inside his quarters, Zeheart explained to them about the EXA-DB and the fact that the search for it had been assigned to their team, tasking Leil with it. Fram was also warned by Zeheart not to reveal anything about the EXA-DB to other Vagan, as that would be considered leaking classified information. Towards the end of the operation, Fram ordered cover fire to assist in the escape of the Vagan forces. When Zeheart returned to the ship, Fram criticized him for letting Zanald push him around. Zeheart brushed it off and asked for the damage report and their casualties. Before leaving, he praised Fram for the excellent cover fire she provided.

One month later, Fram was present at the Luna Base battle as Zeheart’s aide. When he headed out to face the new Gundam AGE-FX, Fram received a vision of him being killed in battle and rushed after him worried. She met with him in the lockers and told him she had a bad feeling about him heading out and didn’t want him to die. He asked her if this was because she wasn’t done testing him and revealed that she knew everything about her being Dole Frost’s sister and her purpose for coming to him. Fram stated that after seeing his care for his subordinates, he had changed her mind about him. As he was leaving, Fram asked why he had her stay so close if he knew her purpose all along, to which Zeheart responded that he would keep any useful person around and that he needed her, much to her surprise. Fram followed Zeheart to the MS hangar and asked to accompany him in the xvb-fnc Fawn Farsia, adding that he could leave her behind if she was becoming a hindrance, which he consented to. As they prepared for launch, Fram stated that he understood her brother’s reasons for saving Zeheart and that she wanted to help him, since he carried so many burdens on his own. The two of them faced the AGE-FX together, until Zeheart was forced to leave her, in order to deal with the advancing Abis team. Fram was almost killed by the AGE-FX, but Kio Asuno spared her, stating that they should find a way to stop the war. Fram angrily responded that it was too late, since so many sacrifices had already been made and simply ending the war wouldn’t pay for the lives of those who died. She proceeded to overwhelm the AGE-FX, until the arrival of Asemu Asuno in the Gundam AGE-2 Dark Hound forced her to retreat back to Zeheart’s position, who proceeded to engage Asemu in battle.

Fram continued to fight against Kio, until Girard Spriggan’s arrival interrupted her, stating that she would take down the Gundam. When Fram demanded she get out of her way, since she almost had him, Girard asked her if she wanted Zeheart’s praise that much. When she responded that she only followed his orders, Girard said that she should have then shot down the Gundam sooner and that her turn was over. Before being able to answer, Fram was chased away by Seric Abis and Derek Jackrow. She returned later to assist Girard, stating that it was Zeheart’s order, since he never abandoned a subordinate. In response to Girard’s query whether Zeheart was such a great guy, Fram answered that she respected him as a commander, prompting Girard to ask her if that was all she thought about him. Fram stated that she only wanted to help Zeheart realize his dream about Vagan’s future, but was told off by Girard, who exclaimed that life doesn’t turn out the way you want. The two of them continued to pound the AGE-FX, until Flit Asuno arrived in the AGE-1G Gundam AGE-1 Glansa to assist Kio. Fram, then, joined forces with Zeheart and Girard to combat the three Gundams, until Girard lost control of her X-Rounder abilities. As a result, she took control of all Bits and Funnels in the area, lashing out at everyone indiscriminately, until she was shot down by Flit. Following the loss of the Luna Base, Fram helped Zeheart in his crippled Ghirarga to retreat. Back at the Fa Zard, Fram started giving orders about the treatment of the wounded soldiers and their departure from the current sector. She was contacted by Aaron Simmons, who wanted to be one of the first to enter the ship. Instead, Fram coldly replied that a commanding officer should make the safety of his soldiers a top priority and revealed that she knew that he had killed a Vagan soldier to gain access to the emergency escape craft. She proceeded to smash the cockpit of his ship with the Fawn Farsia’s baton, stating that she couldn’t allow such a disgusting man on Zeheart’s ship. She was then contacted by Zeheart, who pointed out that Second Moon had reached the Earth Sphere.

Fram Nara in a Pilot Suit

Fram looking at a Memento of her brother

Fram besides Zeheart at Luna Base 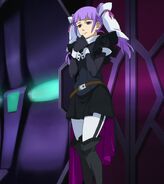