Ford Romfellow is a Earth Federation pilot. Ford is tasked to the warship Thoroughbred with the RX-78-5 Gundam "G05", one of the Federation's testbed Gundams. Ford is often partnered with fellow pilot Luce Kassel. He is very professional, mainly wanting to know specifics within operations he also has a joking side to him, however in battle he frequently gets excited. It is unknown if he remained with the Thoroughbred during U.C. 0083. In the Gundam Legacy manga, Ford reappears with the Federation during the Gryps Conflict as part of the elite Titans taskforce of Bask Om. He does not approve of their methods, believing they breed more conflicts and subsequently quits later to stop a renegade Zeon Attack by working with Republic of Zeon forces. 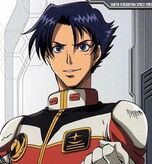 Ford Romfellow
Add a photo to this gallery

Retrieved from "https://gundam.fandom.com/wiki/Ford_Romfellow?oldid=89841"
Community content is available under CC-BY-SA unless otherwise noted.