August 2000–June 2002
For the Barrel (フォー・ザ・バレル, FOR THE BARREL?) is an abstract novel adaptation of Yoshiyuki Tomino's Mobile Suit Gundam. It was serialized in the Japanese Newtype Magazine from August 2000 to June 2002. The series was put as part of the Gundam metaseries and took place in an alternate interpretation of the Universal Century timeline. However, it has no relation or resemblance to any previous Gundam works.

The second Machining Skin equipped with a recoilless rifle. Also known as the "Cannon Boy".

A prototype Machining Skin created by the Earth Federation military. The emphasis on movement in space, which specializes in knocking exercise all four limbs, known as "Elan's Pendulum". Also known as "Albino" due to its coloring and light emitted. 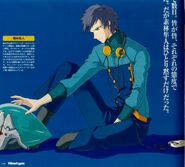 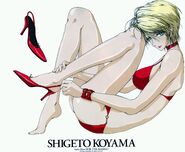 For the Barrel - Sayla Mass

For the Barrel - Ad

For the Barrel - Ride on Pegasus 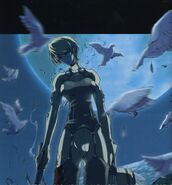