Acting as mostly a figure head, Fixx Bloodman is on of seven New United Nations Earth Officers that make up a committee dedicated to reuniting the Earth. Fixx was content in his role, and maintained a wish for peace with the orbiting space colonies that make up the Space Revolutionary Army.

His position however changed when the six other high ranking officers were killed in what was reported by Shagia and Olba Frost as a bomb placed on their personal jet. Fixx quickly discovered the truth of the assassination, and with the urging of the Frost brothers started to put into motion plans to bring the New United Nations Earth forces to space. His hope was to make contact with D.O.M.E. as well as to use the war that would result with the Space Revolutionary Army as a rallying point to reunite the Earth under his control. 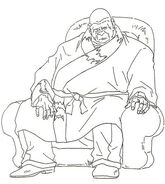 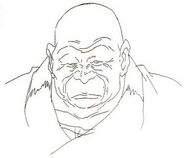 Add a photo to this gallery
Retrieved from "https://gundam.fandom.com/wiki/Fixx_Bloodman?oldid=138453"
Community content is available under CC-BY-SA unless otherwise noted.