Federico Czariano (フェデリコ・ツァリアーノ) is a character that appears in Mobile Suit Gundam MS IGLOO: The Hidden One Year War. He is the commander of Earth Federation's Semovente Corps, a specialized unit which conducts false flags against Zeon Ground Forces in North American front line during the early phase of One Year War.

When Oliver May and Monique Cadillac piloting a Komusai drops Demeziere Sonnen in his YMT-05 Hildolfr into Arizona for field testing, they find the drop zone supply depot destroyed — by a team of Zaku II J-Types captured by LtC. Federico Czariano's Semovente squad. Czariano piloting a captured Zaku II and his squad of Zakus surprise attack Sonnen. Sonnen is forced into combat with the uncalibrated Hildolfr. The fast and powerful mobile tank proves its mettle by taking out all enemies. After a heated battle, Czariano was the only one left of his squad. He charges in towards the Hildolfr and fires it's head unit. Thinking he had won, Czariano goes toward his next target: the Komusai. Using one last shot from the Hildolfr, Sonnen kills Czariano, but not without the cost of Sonnen's life. 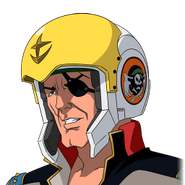