Mobile suit pilot affiliated with the Earth Federation forces' Jaburo base. Active during the assault on Jaburo, his skill is certain but his personality difficult. Known as a fighter pilot since the war began, he was appointed as an MS test pilot as part of Operation V. 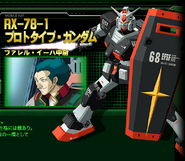 Retrieved from "https://gundam.fandom.com/wiki/Farrell_Iha?oldid=482965"
Community content is available under CC-BY-SA unless otherwise noted.