FXA-08GB G-Core it is the core fighter for the MSA-0011 S Gundam. It is featured in the photo-novel Gundam Sentinel.

A light craft that was developed to function as a space fighter but whose principal role was to serve as the core block of the MSA-0011 S Gundam. During the One Year War, the prototype mobile suits developed by the Earth Federation Forces were equipped with core fighters of this type to ensure the safe recovery of test pilots, expensive computer equipment, and valuable test data. This core block system, however, was omitted from mass production machines for cost reasons. Many of the new machines developed after the end of the war were equipped with escape capsules, but these devices were relatively defenseless and were often unable to escape reactor explosions. As mobile suits became more complex and their computer systems more expensive, the core block system was reintroduced to ensure the survival of these vital parts. Like the core fighter of the original RX-78-2 Gundam, the G-Core can function as a fighter craft, and it can fly in the atmosphere even with the cockpit units of the G-Attacker and G-Bomber attached. However, its armament is limited to four missile launchers.

During the final battle of the Pezun Rebellion, the G-Core is used as an escape vehicle to carry Ryou Roots and his comrades safely through atmospheric entry. 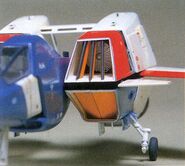 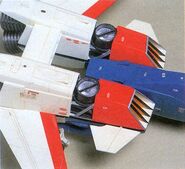