The FXA-05D G-Defenser is a support fighter introduced in the Mobile Suit Zeta Gundam anime.

The FXA-05D G-Defenser is a fighter craft created to support the RX-178 Gundam Mk-II in battle and has similar concept as the One Year War's G-Fighter. It has powerful thrusters, Gundarium alloy armor and is armed with missiles, vulcan guns, mini laser guns and a long rifle. In combat, the G-Defenser can serve as an independent support unit for the Gundam Mk-II, or dock with it to form the more powerful RX-178+FXA-05D Super Gundam.

A pair of 14-tube missile pods are mounted on the two protruding armament units at the sides.

The most powerful weapon of the G-Defenser, it is a high powered beam weapon mounted on the starboard side.

A pair of mini laser guns are mounted on the nose of the G-Defenser's cockpit capsule. They are the cockpit capsule's primary and only weapon when disengaged from the main body. Because of the development of semi-transparent coating before the One Year War, laser weaponry are limited in effectiveness, especially against battleships. The mini laser guns are fire-linked and have a power rating of 1.7 MW each.

The G-Defenser has four vulcan guns mounted on the sides of the missile pods. They primarily serve as defensive weapon in close to mid range combat, intercepting incoming enemy units, missiles, etc.

To prevent the RX-178 Gundam Mk-II from being outclassed by Titans' transformable mobile suits, Anaheim Electronics developed a dedicated support fighter, the G-Defenser. It can dock with Gundam Mk-II to form the G-Flyer transport unit and then the RX-178+FXA-05D Super Gundam following the detachment of the support fighter's cockpit capsule. The G-Defenser and its cockpit capsule were destroyed by Yazan Gable's RX-139 Hambrabi, but the Gundam Mk-II survived the destruction.[1] 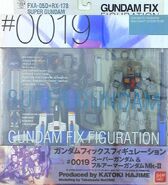 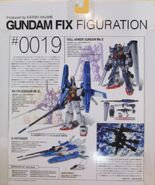 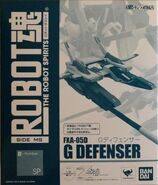 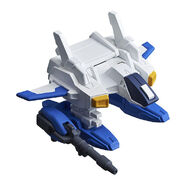 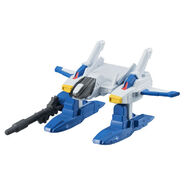