The FX-550 Skygrasper is an aerial support fighter introduced in the anime Mobile Suit Gundam SEED.

The Skygrasper was a fighter aircraft originally designed to support the GAT-X105 Strike Gundam. To fulfill this role, it was given the ability to mount the Strike Gundam's Striker Packs so as to deliver them to the mobile suit during combat, and this removes the need for the mobile suit to return to the hangar of its mothership for re-equipping. In addition, the Skygrasper can utilize many of the Packs' weapons and equipment, such as the Aile Striker's thrusters for additional speed and agility, the Sword Striker's anti-ship sword and rocket anchor for close range attacks, and the Launcher Striker's beam cannon for enhanced long-range firepower, allowing it to provide fire support for the Strike Gundam.

On its own, the Skygrasper is armed with a turret-mounted beam cannon, two medium caliber cannons, four machine guns, and can launch anti-ship missiles, bombs, etc from the two weapons bays, making it a very capable air superiority fighter in its own right. In fact, the combination of these weapons and the Skygrasper's maneuverability grant it combat capabilities on par with most mobile suits. Like its predecessor, the F-7D Spearhead, the Skygrasper is capable of VTOL. The Skygrasper was eventually put into mass production by the Earth Alliance to support the Dagger series mobile suits that could utilize Striker Packs. These mass production units are mostly identical to the original two units assigned to support the Strike Gundam, except in their color schemes, where they are painted in gray and yellow instead of the original's brighter colors.

The Skygrasper features four 20mm machine guns mounted behind the nose. They typically do not have the power to damage the armor of a mobile suit, but can be used to restrict enemy mobile suit's movements, intercept missiles and the likes.

One mounted on each wing, their firepower is in between the machine guns and the beam cannon.

The most powerful weapon on the Skygrasper is a beam cannon it carries on its back. The cannon is part of a turret that can swivel to fire in different directions.

Stored and launched from the two weapon bays.

The Skygrasper is designed with 3 Hardpoints to mount any of the GAT-X105 Strike Gundam's Striker Packs and its armaments. In doing so, it allows the Skygrasper to use these armaments to increase its overall firepower and combat potential, while still fulfilling its role as both a support fighter and a Striker Pack delivery system for the Strike.

Used for storing and launching anti-ship missiles and other projectiles.

In CE 71, the Earth Alliance successfully created five mobile suits of their own as part of the G Project. One such unit was the GAT-X105 Strike Gundam, which had the ability to mount Striker Packs to adapt to different combat situations. Additionally, the Skygrasper was developed as an atmospheric support fighter for the Strike Gundam and is capable of using the same Striker Packs.

After fleeing the destruction of Heliopolis, the assault ship Archangel was assigned two Skygraspers when it rendezvoused with the 8th Fleet.[1] Following the Archangel's descent to Earth, mobile armor ace Mu La Flaga switched to the Skygrasper Unit 1, as his TS-MA2mod.00 Moebius Zero cannot be operated on Earth. Mu favored mounting the Launcher Striker on his Skygrasper for its superior firepower. Skygrasper Unit 2 was initially piloted by Cagalli Yula Athha, and later by Tolle Koenig.[2][3] As the Launcher Striker was usually taken by Skygrasper Unit 1 and the Aile Striker by the Strike, Unit 2 was typically equipped with the Sword Striker. Unit 2 was somewhat unlucky; it was shot down or forced into an emergency landing every time it was deployed but once. While Cagalli came out of these crashes unharmed, Tolle was killed when the GAT-X303 Aegis Gundam threw its shield into Unit 2's cockpit.[4]

The Earth Alliance later put the unit into production, but it is unknown how many were built. However, at least one is owned and operated by professional MS pilot, Kaite Madigan. The Alliance also developed the FXet-565 Cosmograsper, which is a space-use variant of the Skygrasper.

During the Second Alliance-PLANT War, the Archangel has at least a single Skygrasper unit, which Neo Roanoke used to defend the ship at the Second Battle of Orb.[5][6]

Equipped with Aile Striker and Strike's Beam Rifle and Shield 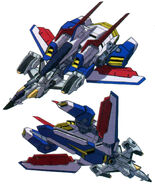 Mass Production Colors (Side and Rear)

Being transferred to the Archangel (Flay's Decision, HD Remastered)

Taking off (The End of the Sandstorm, HD Remastered)

Cockpit (1) (The End of the Sandstorm, HD Remastered)

Equipped with Sword Striker and tailed by ZAFT's Infestus (The End of the Sandstorm, HD Remastered)

Close up of nose unit (The Turning Point, HD Remastered)

On a Landing Pad (Freedom and Justice, HD Remastered) 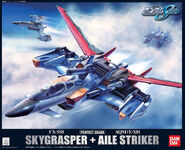