The FLAT-L06D FLAT (aka "High Heel", as colloquially referred to by the Militia groups) is general purpose mobile suit featured in the Turn A Gundam anime series. The FLAT name is an acronym that stands for Flexible Ladder Actuator Technology.

While designed mainly as an atmospheric re-entry unit, the FLAT-L06D FLAT was more than capable of serving as an battle unit. The main armament of the FLAT consists of collapsible box beam rifle and box missile launcher. The FLAT also possessed a feature called Hyper Vibration, which allowed the FLAT to burrow itself into the ground, deflect enemy fire and destroy nearby objects.

In CC 2343 several FLATs launch from the Moon to Earth. One was carrying Moonrace citizens Loran Cehack, Fran Doll and Keith Laijie to Earth to live there for two years as part of experiment on adapting to Earth living, once landed the trio would bury the FLAT to hide it. When war begins between Earth and the Moonrace in CC 2345, Keith sells the FLAT to the Inglessa Militia so that he can raise money to expand his Donkey Bakery. That FLAT (aka High Heel) is painted in a new red color scheme and handed over to Joseph Yaht to pilot. Other FLATs also appear during the war, piloted by the Diana Counter Forces and by the Red Team's Cancer Kafka and Muron Muron, who are descendants of Moonrace citizens who settled on Earth. Late in the war, Joseph's FLAT is retrofitted with the Core Fighter from Loran Cehack's SYSTEM ∀-99 (WD-M01) ∀ Gundam to serve as its cockpit.

Only appears in Dengeki Hobby Magazine's Before ∀ Gundam. In this setting, the FLAT was originally developed for public security and designed for suppressing riots. It generates low frequency vibrations from the armor to trigger nausea and thereby disperse rioters. 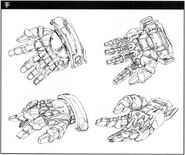 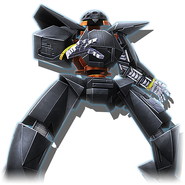 FLAT and Mahiroo adrift in space