The FFMH-Y101 Eternal is a support ship introduced in Mobile Suit Gundam SEED. As it was extremely task-specific, only one such vessel, the class namesake, was ever produced.

The Eternal is a space warship built by ZAFT to specifically support the nuclear powered ZGMF-X09A Justice Gundam and ZGMF-X10A Freedom Gundam, and has special facilities for maintaining both mobile suits. To accompany both highly mobile machines in battle, the Eternal also has high speed and can outrun even the Nazca-class, ZAFT's fastest class of ship. It is lightly armed, with only a single large beam cannon, a pair of twin rail guns, numerous CIWS, and countless batteries of defensive missile launchers. Additionally, the Eternal carries a pair of Mobile suit Embedded Tactical Enforcer (METEOR Units), an optional armed module for the Justice and Freedom Gundams, which can also function as gun turrets for the ship when not utilized by the two mobile suits.

A single beam cannon mounted in front of the bridge. It is incapable of rotating sideways, but its barrel can swivel upwards.

A pair of twin railguns mounted behind the bridge on either side of the ship.

A large number of CIWS guns are mounted on the Eternal and they serve as part of the ship's defense against enemy mobile suits and missiles.

A large number of small beam cannons are mounted on the ship.

A pair of armed modules stored at the front of the ship.

Soon after its completion, the Eternal was stolen by the Clyne Faction, and was commanded by Lacus Clyne and Andrew Waltfeld, who used it to escape the PLANTs.[1] Together with the Archangel and the Kusanagi, the Eternal formed the Three Ships Alliance, an independent force that successfully ended the First Alliance-PLANT War.[2]

The Eternal was hidden in an asteroid after the war, while Andrew and Lacus secretly immigrated to the Orb Union.[3]

After Andrew and Lacus returned to space, the two reunited with some of the remaining members of the Clyne Faction, including Martin DaCosta, who had been commanding the Eternal in their absence.[3]

Eventually, a ZGMF-LRR704B GINN Long Range Reconnaissance Type located the Eternal, forcing it to flee its asteroid base to draw ZAFT forces away from the mobile suit factory also concealed within the base. The Eternal approached Earth as Andrew fought the pursuing ZAFT forces in the stolen ZGMF-X88S Gaia Gundam, until Kira Yamato arrived in the MBF-02 Strike Rouge to assist. During the battle, the outdated Strike Rouge was badly damaged, resulting in Kira boarding the ship and being presented with the ZGMF-X20A Strike Freedom Gundam, which he used to defeat the pursuers.[4]

After the Earth Alliance was more or less defeated by ZAFT, the Eternal, together with other ships of the former Three Ships Alliance and Orb, tried to stop PLANT chairman Gilbert Durandal from taking full control over the Earth Sphere. The group successfully stop him and brought an end to the second war.[5]

Hiding in an asteroid 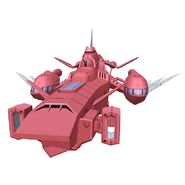