The FF-X7BstPLAN004 Core Booster Plan004 is a prototype aerospace fighter based on the FF-X7-Bst Core Booster. It first appeared as a part of the MSV-R line.

The FF-X7BstPLAN004, or Core Booster Plan004, is one of the testbeds for the Core Booster concept. It was deployed by the Earth Federation Forces to produce a highly-mobile combat platform utilizing cutting-edge weapon technologies without the complexity and manufacturing cost of a mobile suit. The plane has both atmospheric and space-flight capability. As its name suggests, a complete Core Booster unit is basically a Core Fighter combined with a heavily-armed booster module, greatly improving its acceleration (which directly contributes to the unit's battlefield survivability), firepower, and operational endurance. Adding two powerful mega-particle cannons and four 25mm autocannons to the Core Fighter's existing armaments, the Core Booster could serve as a multi-role fighter; in space, the Core Booster could effectively support Federation mobile suits and warships.

Part of the Core Fighter's existing weapon systems, up to four of these air-to-air missiles can be carried in each of the fighter's two retractable missile launchers.

Two dorsal- and two ventrally-mounted 25mm autocannons in the booster module add to the Core Fighter's existing pairs of Vulcan cannons, making it much easier to overwhelm lightly-armored targets with sheer volumes of projectiles.

The two dorsal-mounted Mega Particle Cannons are the Core Booster's primary offensive weapons. These weapons are powered by the booster unit's onboard reactor.

The FF-X7 Core Fighter was originally created to increase the survivability of mobile suit pilots by functioning as an escape system. The Earth Federation initially had high hopes for the Core Block System concept and invested considerable resources to build production facilities for the Core Fighter, only to ultimately find it cost-ineffective for their mass-produced RGM-79 GM.

However, halting mass-production of the Core Fighter or even just scaling back to supplying Gundam units currently in operation with spare parts and attrition replacements would mean these production facilities would be, if not outright wasted, operating at below-optimal efficiency. A plan was therefore devised to create an addon module for the Core Fighter, giving it an alternative use as a full-fledged combat weapon and making its mass-production worthwhile. This plan was approved with three additional requirements. First, the Core Fighter is to be improved using existing technologies so that development would only need to be focused on system integrations. Second, on account of the already-high cost of the Core Fighter itself, which had such expensive technologies as the learning computer, the production of the addon module must be kept low-cost. And, finally, the complete unit must be capable of operations both on Earth and in space. The FF-X7BstPLAN004 Core Booster Plan004 was one of the proposals as a result. 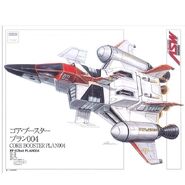