The FF-X7 Core Fighter's computer had more than 10 times the processing power of other fighters, and therefore it was highly versatile as a multipurpose fighter. However, the small size of the aircraft and the transformation mechanism for the Core Block System resulted in limited firepower and fuel capacity, so the potential performance in the design could not be fully utilized. Therefore, Hervic Company developed the Core Booster, which attached to the rear of the Core Fighter to improve its performance. The Core Booster was designed using the G-Sky and G-Sky Easy as references.

Along with high maneuverability, the Core Booster featured additional armaments in the form of mega particle cannons, missiles, and bombs, as well as additional propellant tanks which allowed it to carry more fuel. However, the Core Fighter's original air-to-air missile launchers were unable to be used while docked. Like the Core Fighter, the Core Booster used a hybrid propulsion system of thermonuclear rocket thrusters and jets, allowing it to operate effectively in the atmosphere as well as in space. The booster section could be disconnected while flying in case of an emergency.

Two pairs of vulcan guns were mounted in the nose of the Core Fighter. While essentially ineffective against mobile suit armor, they were useful for combat against other aircraft, intercepting incoming missiles/rockets, destroying mobile suit sensors, and attacking lightly-armored vehicles.

Two mega particle cannons were mounted on the top of the booster section and are powered by the aircraft's reactor.

A total of four micro missile launchers were mounted on the sides of the fuselage.

Numerous multi-warhead bombs could be dropped from a bay on the underside of the fuselage.

Once the initial plans for the Core Booster proposed by Hervic were approved, two prototype units were immediately manufactured and deployed to the SCV-70 White Base. The concept of the Core Booster inspired the FF-X7Bst-II Core Booster II Intercept Type, as well as the FFB-7Bst Jet Core Booster, which abandoned the Core Block System in favor of an integrated booster.

Core Booster and Core Fighter as seen on Mobile Suit Gundam: The Origin 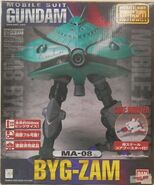 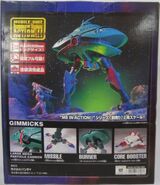 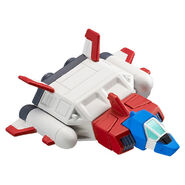