The FF-X29A G-Parts [Hrududu] is a support fighter developed for use with the RX-121 Gundam TR-1 [Hazel Custom].

The G-Parts [Hrududu] was a departure from previous optional parts, as the unit itself could function as an independent support craft and was also equipped with a cockpit that can accommodate a pilot. The Hrududu takes inspiration from the concept of the G-Fighter developed as a support mecha for the RX-78-2 Gundam during the One Year War. However, It lacks the ability to perform midair docking and conversion as the G-Fighter. Before a sortie, it is either attached to the Hazel Custom or launched separately as a support machine.

The Hrududu's wing units are unique as they each feature different functions. The booster wing unit functions as a supplemental thruster, and the claw wing unit.

The claw unit is equipped a hardpoint(s) for carrying weapons and energy packs, and the claw unit itself unfolds into an articulated claw with a Beam emitter.

The beam emitter within the Claw Unit can function as either a beam gun or beam saber, and by combining the barrel of the long blade rifle to the beam emitter, it is able form a beam cannon.

A long beam rifle with a blade, similar to Zeon Heat melee weapons, along the barrel. 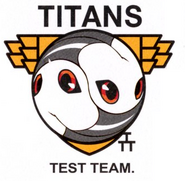