A mass-produced atmospheric use interceptor developed and manufactured by the Hervic Company for the Federation Forces, The TIN Cod was lightly armed with four 25mm machine guns and two air-to-air missile racks. This light payload made the TIN Cod both inexpensive to produce and highly maneuverable, and although production was delayed significantly, it saw action during the One Year War. Its design serves as the basis of the FF-X7 Core Fighter.

Although first flown in UC 0062 as a prototype, The TIN Cod remained in service as late as UC 0087 and saw combat during the Gryps Conflict when the AEUG attacked the Titans supply base in Jaburo, South America. However, by this time these nimble aircraft are hopelessly outdated in the era of mobile suit warfare. The improved TIN Cod II, introduced in the U.C. 0090s, is considered to be the successor of the Fly Manta Fighter-Bomber. 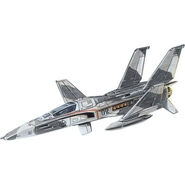 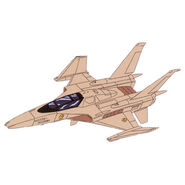 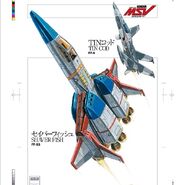 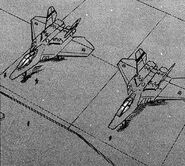