FF-08-GB/WR Wyvern (aka Wivern) is an aerospace fighter aircraft. The unit was featured in the photo-novel Gundam Sentinel.

The Wyvern was a Federation Forces aerospace fighter aircraft designed to fly up to extreme altitudes into space and back to the Earth's surface. The Wyvern’s delta-wing form is ideal for the high-altitude hypersonic flight regime of the atmosphere, and because it is similar in design to the wave rider form of the Zeta Plus series this aircraft is often used as a trainer aircraft for transformable mobile suit pilots.

The Wyvern runs hybrid engines that can switch from turbofan to rocket mode at high altitudes. One drawback of these engines is that they consume a great deal of fuel in rocket mode, for this reason the Wyvern can be equipped with external fuel tanks. Its movable tail stabilator allows the Wyvern to perform AMBAC maneuvering like a mobile suit, and its nose is based on that of the Core Fighter series, further increasing its suitability as a transformable mobile suit trainer.

The Mistletoe is an experimental fighter based on the FF-08WR Wyvern. It incorporates an entire FF-08GB Core Fighter rather than just its nose section, and is designed to cruise at supersonic speeds and then separate for low-speed dogfighting. Although it remains an experimental machine, the Mistletoe is later converted for space operation and used as a trainer for docking and separating transformable mobile suits.

A space fighter developed directly from the Wyvern, it is considered the successor to the FF-S3 Saberfish.

The FE-08WR is an electronic warfare version of the Wyvern, and is distinguished by the rear stabilizer, which is equipped with various types of sensors. 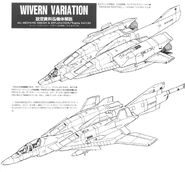 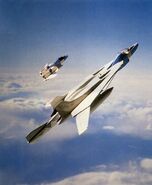 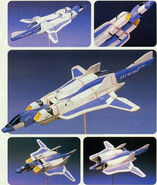 Retrieved from "https://gundam.fandom.com/wiki/FF-08-GB/WR_Wyvern?oldid=493636"
Community content is available under CC-BY-SA unless otherwise noted.