A direct successor to the RGM series, the Gustav Karl is developed by the Earth Federation as a next generation, mass production general-purpose mobile suit. However, it is developed along separate lines from the RGM-89 Jegan and is designed with a focus on enhanced operability under gravity.

The Gustav Karl is bigger and more heavily armored than the Jegan, but this did not hinder its versatility. To counteract the added weight, the suit has a higher output reactor, and multiple thrusters and attitude control verniers are placed throughout its body to maintain mobility and maneuverability. On paper, its specifications are much better than the Jegan's. The Gustav Karl has a simple armament consisting of vulcan guns, two beam sabers, a beam rifle, a grenade launcher, and a flexible shield.

When operating in the atmosphere, it can board the BJ-K232 Kessaria sub-flight system. Early version of the Gustav Karl was deployed in UC.0096 at certain Earth Federation Ground Force facilities, under the pretext of functional testing.

Depending on the version of Gustav Karl depicted, its shield is mounted on a backpack linked movable arm or directly attached to the left shoulder armor. Regardless of the attachment point, the flexible shield can swivel 180 degrees, offering protection straight forward, straight backward, and from any angle that is left or right.

An early version of the Gustav Karl was deployed by the Earth Federation Forces in U.C.0096 in certain ground facilities such as the Cheyenne base. During Bright Noa's investigation of said base, the Tri-Stars team disarmed a guarding Gustav Karl by covering its main camera and cutting off its forearm with a beam saber in a surprise attack.

In U.C.0097, the Gustav Karl was deployed alongside some RAS-96 Ankshas and RGM-89D-ESC Jegan Type D Escort Types to escort Martha Vist Carbine. After an attack led by Michelle Luio with several MSK-008 Dijehs, most of the Gustav Karls were destroyed.

It was used to defend Federation cabinet members in Adelaide, Australia from a terrorist attack led by Mufti Nabiyy Erin (a.k.a. Hathaway Noa). The Earth Federation Forces used the Gustav Karl alongside the RX-104FF Penelope to counter the terrorist group's Me-02R Messer and Mufti's powerful RX-105 Ξ Gundam. As mobile suits were entering the age of miniaturization, the Gustav Karl was produced in limited numbers. 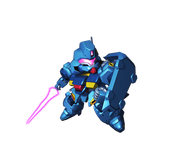 Retrieved from "https://gundam.fandom.com/wiki/FD-03_Gustav_Karl?oldid=459665"
Community content is available under CC-BY-SA unless otherwise noted.