The RX-93-ν2 Hi-ν Gundam equipped with the F.S.W.S (Full-armor System and Weapon System) that provides the suit with additional armor on the chest and front skirt, additional verniers on the legs and more powerful weaponry. The front skirts are equipped with a pair of sub-arms with beam sabers, additional missile launchers are added on the chest and shoulders, and the suit also uses a higher output beam rifle and a larger shield with two mega particle cannons. The Hi-ν Gundam Heavy Weapons System Type also has the ability to change into a high mobility form, which can carry two hyper bazookas, by mounting the new shield on its back.

Located in the Hi-ν HWS's right forearm, the beam gatling gun is powerful enough to destroy other mobile suits with a concentrated stream of fire. It can also generate a beam blade for close combat.

The Hi-ν Gundam HWS carries a total of five beam sabers for close combat, one is stored in the left forearm for rapid deployment, two more are stored in the back-mounted binders, and the last two are equipped on the front skirt mounted sub-arms. The beam sabers stored in the wing binders are capable of producing a second beam blade from the bottom of the hilt for surprise attacks or handling multiple opponents in combat. All five sabers' beams are tinted a royal blue to match the Hi-ν HWS's paint job.

The Hi-ν Gundam HWS carries 6 fin funnels, mounted on the mobile suit's back in a wing-like formation; they are useful for attacking a single opponent or multiple enemies from various direction simultaneously. Compared to previous remote weapons, the fin funnels' power rating is increased, giving them firepower comparable to beam cannons. The Hi-ν HWS is capable of refueling its fin funnels. The fin funnels can arrange themselves into geometric formations to deploy the fin funnel barrier like the ν Gundam, a defensive field that can repel any attacks with lower output than the fin funnel's.

An improved version of the multi-use launchers that were widely used in the Gryps Conflict, the missile launchers mounted on the shoulders of the Hi-ν Gundam HWS carries 4 missiles each.

A second pair of missile launchers are hidden in the additional chest armor. They are revealed when the chest armor flip up.

Unlike the FA-93HWS ν Gundam Heavy Weapons System Type, the Hi-ν Gundam Heavy Weapons System Type's hyper mega rifle is actually the Hi-ν Gundam's standard beam rifle with additional parts attached onto it to enhance its power. At maximum output, the hyper mega rifle's power is comparable to that of several battleship-class mega particle cannons. This weapon also supported ultra-long-range sniping and featured a bipod for precision firing. A sensor built into the rifle adjusts the power output according to the target's distance, and could be controlled via the mobile suit's psycho-frame system.

The same beam rifle as used by the normal Hi-ν Gundam, it is powered by an E-Cap and has variable output that at maximum level can rival the mega particle cannons used by the warships at that time.

The same bazooka as used by the normal Hi-ν Gundam. It is capable of destroying an enemy unit in a single shot and is mostly used to take out slow, heavily armored targets. The suit can optionally carry up to two new hyper bazookas, and when the suit is in high mobility form, the two new hyper bazookas are stored on the underside of the back-mounted hyper mega shield.

A large shield that is armed with a pair of mega particle cannons. It is mounted on top of the Hi-ν Gundam's original shield when the suit is in its normal form. When the suit is in high mobility form, the Hyper Mega Shield is mounted on the back, and its sides will separate and adopt a configuration similar to the MSN-00100 Hyaku Shiki's wing binders

The same shield as used by the normal Hi-ν Gundam, it is emblazoned with Amuro's emblem and features a built-in 7.8 MW beam cannon and four missiles.

Mounted on the back, the external propellant tanks substantially increase the amount of fuel the Hi-ν Gundam HWS can carry, thus increasing its operational flight time. When the fuel is depleted, the tanks can be ejected to decrease mass. The propellant tanks also mount thrusters near the bottom to improve the suit's mobility.

The Hi-ν HWS's cockpit is lined with nanoscopic psycommu receptors, allowing a Newtype pilot to operate both the mobile suit and psycommu weaponry with ease. Amuro Ray would make great use of this feature, controlling the Hi-ν HWS and maneuvering its fin funnels like extensions of his own body.

The additional front skirt armor contains a pair of sub-arms that are folded and stored underneath the armor when not in use. Each of the sub-arms is armed with a beam saber. 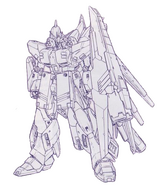 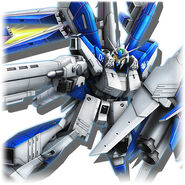 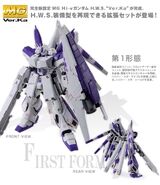 Retrieved from "https://gundam.fandom.com/wiki/FA-93-ν2HWS_Hi-ν_Gundam_Heavy_Weapons_System_Type?oldid=495865"
Community content is available under CC-BY-SA unless otherwise noted.