The FA-78 Full Armor Gundam (Thunderbolt Ver.) is a mobile suit from the Mobile Suit Gundam Thunderbolt series. It is piloted by Io Fleming.

A heavily armored and highly maneuverable Gundam-type mobile suit deployed by the Moore Brotherhood. There was another type of Full Armor Gundam with similar model number, the FA-78-1, but it had different details and equipment. Both mobile suits were developed under the ‘Full Armor Operation’, and their differences were a result of experimenting with various systems and equipment.

The Full Armor Gundam was fitted with numerous pieces of body armor, a large backpack and had much more weaponry than other mobile suits of its time. Like other mobile suits of the Moore Brotherhood, the Full Armor Gundam had special seals on its joints and large backpack to protect them from the debris drifting in the Thunderbolt Sector. Besides the standard beam sabers, it was also armed with a twin beam rifle, five rocket launchers, a large beam cannon, a 6-tube missile pod and numerous missiles stored in various body armor.

Using the two sub-arms on the large backpack, the machine could wield up to four shields, greatly increasing its defensive capabilities. To prevent the weight of the added equipment from reducing the mobile suit's mobility, thrusters and apogee motors were installed on the shoulders, legs and large backpack. The large backpack was also fitted with two rocket boosters, and the Full Armor Gundam's total thrust was considered to be comparable to a high mobility-type mobile suit.

The Full Armor Gundam's added body armor, the large backpack and most of the weaponry could be purged when they are damaged or not required, reducing dead weight. After witnessing the power of the Moore Brotherhood's Full Armor Gundam, the Zeon's Living Dead Division, which was operating in the same area, decided to deploy the MS-06R Zaku II High Mobility Type (Reuse "P" Device).

A large double-barrel beam rifle held by the right arm, it is very powerful and has a wide shooting range due to how it is carried. It is powered by a removable energy pack at the back. Six spare energy packs are stored on the large backpack in a 3 x 2 arrangement; the replacement of the twin beam rifle's energy pack can be carried out by the sub-arms. A small shield is attached to the side, and a full-sized shield can be mounted on top of the small shield to better protect the twin beam rifle.

A movable, large beam weaponry mounted on the top right of the large backpack. Its fired beam has sufficient firepower to penetrate the large debris drifting in the Thunderbolt Sector.

A large, powerful projectile weaponry, a set of five is carried on the left forearm and a full-sized shield can be attached on their sides. Individual launcher can be removed and attached onto a debris, even ship-sized one, and the rocket's thruster can then be fired up to move it.

A movable, 6-tube missile pod is mounted on the top left of the large backpack and it can carry a variety of missiles. One such missile is capable of launching numerous wired micro-missiles, creating a dense barrage that is also effective for group battle.

The full-sized shield used by the Full Armor Gundam (Thunderbolt Ver.) has a different shape from that of the RX-78 and is also larger in size. It is made of multiple laminate layers, but can still be penetrated. Up to four full-sized shield can be equipped - two held by the sub-arms, one mounted on the twin beam rifle and one mounted on the set of five rocket launchers. The shield also has a grip on the back for holding by the normal hands and an attachment point for mounting directly onto the forearm.

A pair of simple manipulators mounted on the front of the large backpack. They are articulated and can be used for various purposes, such as exchanging energy packs or weapons, removing the rocket boosters, holding shields, etc.

A pair of rocket boosters are fitted on the large backpack and they also serve as propellant tanks. Thrusters and apogee motors are installed in the tips of the boosters, contributing to the Full Armor Gundam (Thunderbolt Ver.)'s high mobility. The rocket boosters can be ejected when emptied or to serve as decoy.

The cockpit of the Full Armor Gundam (Thunderbolt Ver.) is located in a core block within the machine's torso. During an emergency, the core block can be ejected and will transform into an emergency pod to allow a speedy escape from the battlefield.

Io would sortie to confront the snipers that made short work of the GM team earlier, using the Gundam's superior firepower to destroy all of the Zeon Mobile Suits save for the MS-05 Zaku I (Thunderbolt Ver.) piloted by Daryl Lorenz, who drove off Io with a cracker grenade at the cost of his left forearm. Frightened by the power of the Full Armor Gundam, the Living Dead Division modified Daryl to pilot the MS-06R Zaku II High Mobility Type (Reuse "P" Device) to combat the Gundam.

The two Mobile Suits clashed in the ruins of Moore, ending with Daryl victorious with the Full Armor Gundam disabled and the Brotherhood captured. The damaged Full Armor Gundam was left in the hands of the Living Dead Division after the Battle of A Baoa Qu where, sometime later, its head and exterior armor parts were used for the Perfect Gundam (Thunderbolt Ver.)

Close-up in the ONA 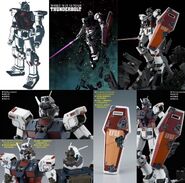 Comparison of damaged base unit between Manga, OVA and P-Bandai model kit

Comparison between Manga and OVA 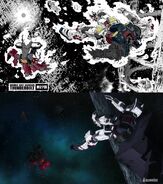 Ending comparison between Manga and OVA 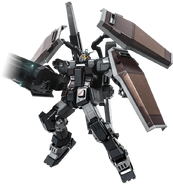 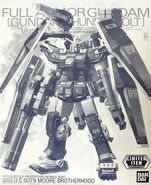 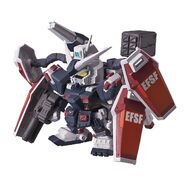