The FA-78-NT-1 Full Armor Gundam "Alex" is a variant of the RX-78NT-1 Gundam "Alex" and is featured in Mobile Suit Gundam Katana. It is piloted by Kotetsu.

Mounted in the head, the pair of shell-firing guns have high rate of fire but low power. They are primarily used to ward off advancing enemies, intercept missiles and the likes.

Stored in armor covers on both forearms. The gun barrel is usually hidden and pops up during use. These weapons are unusable when the Gundam Alex is fitted with additional armor.

The standard close combat weapon for Earth Federation mobile suits, it is a small device held in the mobile suit's hands when operated and is powered by a rechargeable energy capacitor. The beam saber emits a blade of plasma contained by an I-field and can through most armor not treated with an anti-beam coating. A pair are stored on the backpack in the Gundam Alex's base configuration, and they are relocated to the rear skirt armor when additional armor equipment is mounted.

Originally, there was a plan to equip the Gundam Alex with FSWS equipment. However, the original Gundam Alex was said to have been disassembled on Earth after the end of the One Year War, and this plan never came to fruition.

In U.C. 0084, however, True Federal reproduced a single Full Armor Gundam Alex. It was piloted by the Cyber Newtype Kotetsu, who was able to draw out all of the Gundam's potential. Because of this, the Full Armor Alex proved to be extremely agile despite its heavy equipment.

After Kotetsu defected to BGST, the Full Armor Alex was modified into the RX-78NT-X NT-X by Dr. Henry, a former Flanagan Institute researcher, based on data provided by his colleague in the Murasame Lab. 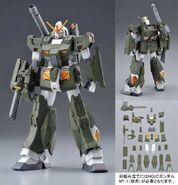 Retrieved from "https://gundam.fandom.com/wiki/FA-78-NT-1_Full_Armor_Gundam_%22Alex%22?oldid=465209"
Community content is available under CC-BY-SA unless otherwise noted.