When the Heavy Gundam was assigned to Ingrid 0, because of the lack of a Core Block System, there was enough space to equip a modified Bio-Sensor using Zeon technology and it was adjusted to her abilities.

Based on the beam rifle used by the RX-78-2 Gundam, the custom beam rifle uses an enlarged, drum-shaped Energy CAP, increasing the number of shots by approximately 80%.

An improved version of the Hyper Bazooka, this bazooka has the same ammo capacity, but its range has been increased by 20%. Its accuracy has also being improved.

A technological variant of the Psycommu system developed by Anaheim Electronics. Although its full capabilities are unknown, its primary purpose is to allow a Newtype pilot to more easily interface with his mobile suit via mental commands. The bio-sensor could also have a rather surprising side effect when the pilot was mentally and emotionally focused enough (usually when angry or upset) to cause the bio-sensor to amplify the power, speed, and strength of the mobile suit for a short period of time.

Stored in the hands the launchers can deploy mobile suit sized dummy balloons as a decoys.

Performance tests with Unit 2 were carried out from July to August of U.C. 0081. While the third Heavy Gundam unit was lost in an atmospheric entry test, the two remaining machines were used in short-term data collection operations by experimental units. 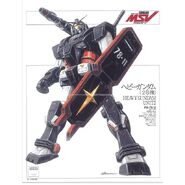