The Full Armor Gundam was one of the mobile suits developed under the "FSWS (Full-Armor System and Weapon System) Plan" initiated by the Earth Federation Forces in the late stages of the One Year War. This plan was based on feedback from the various data collected by the RX-78-2 Gundam, and served to enhanced the Gundam's capabilities through the equipping of additional armor and weaponry.

On the Full Armor Gundam, the added armor are mainly placed on areas that are more frequently hit or damaged in combat, such as the chest, shoulders, waist, forearms, legs, etc. These added armor are also designed to be removable. To achieve a level of firepower equivalent to a single battleship, the Full Armor Gundam is equipped with a new backpack-mounted 360mm rocket launcher, missiles bays in the added chest and leg armor, and a twin beam rifle on the right forearm. It also has a small shield on the left forearm, and retained the original Gundam's head-mounted Vulcan guns, while the pair of beam sabers were relocated to the added armor on the back of the waist.

However, due to the increase in weight caused by the added armor and weaponry, the mobile suit suffered a drop in mobility. To solve this issue, auxiliary propulsion units were added to the legs, and as a result, the amount of thrust produced per leg is comparable to the Core Booster's main thrusters. With this, the Full Armor Gundam can engage in a high mobility combat with a mobile armor, or retreat quickly during an emergency. It was originally intended that the Gundams produced under the FSWS Plan would be piloted by a unit composed of Newtype pilots, but the war ended before this was possible.

A large rocket-firing cannon mounted on the right side of the backpack, and on the left is a control and targeting device.

A double-barreled armament equipped on the right forearm. Its barrels can be folded for storage.

A small, simplified shield that is integrated with the additional armor on the left forearm.

A beam weapon for close combat. Two units could be mounted on holders in the added armor on the back of the waist. However, the holders are simple in design and are not equipped with the energy recharge mechanism for the beam sabers.

There are conflicting accounts of whether the Full Armor Gundam was ever built. According to MSV-R, it only existed as simulation data. However, Mobile Suit Gundam: Big Picture Book of Strategy and Tactics stated that it was piloted by Lieutenant Heinz Baer during the war. In Mobile Suit Gundam MSV Battle Chronicle Johnny Ridden, it was destroyed by Johnny Ridden's "Full Bullet Zaku" at A Baoa Qu. 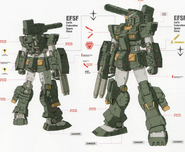 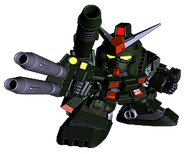 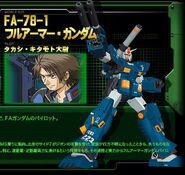 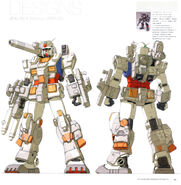 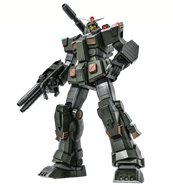 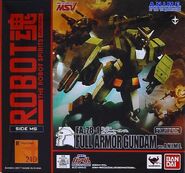 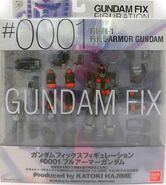 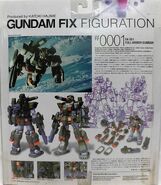 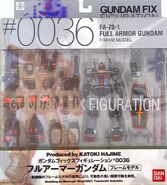 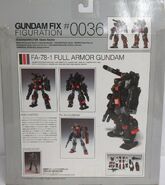 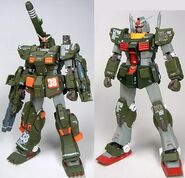 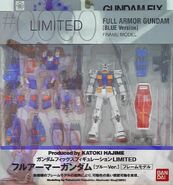 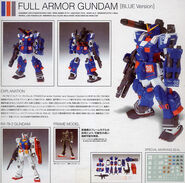