The FA-78-1B Full Armor Gundam (Type B) (aka FA-G3) is an Earth Federation Forces mobile suit that first appeared in MSV-R: The Return of Johnny Ridden.

The Full Armor Gundam (Type B) was one of the mobile suit designs created as part of the Full-Armor System and Weapon System (FSWS). The goal of the FSWS project was to improve the capabilities of the RX-78 Gundam via the addition of armor, weapons and supplementary propulsion system. The machines created were intended to be used by a special ops team consisting of Newtype pilots.

The Full Armor Gundam (Type B) was a further development of the FA-78-1 Full Armor Gundam's design, and utilized the RX-78-3 Gundam "G-3" as the base machine, therefore it was also known as the 'FA-G3'. The Type B's weapon and fire control systems were redesigned, and were said to be far superior to those of other mobile suits of its time. It also had an improved reactor with higher output, as well as a customized long-distance optics observation system on its backpack.

Unlike the original Full Armor Gundam (Type A), which had a balance of anti-mobile suit and anti-ship capabilities, the Full Armor Gundam (Type B) was meant for mid-range bombardment and had higher firepower. Its armament consisted of a 360mm rocket launcher, a total of 48 missiles contained in two shoulder compartments, two knee compartments and a large missile launcher, a triple beam rifle, a pair of head Vulcans and two beam sabers.

The Type B would play an anti-ship role in fleet battles, attacking the enemy's flagship after breaking through the escort ships and mobile suits with its heavy firepower which was comparable to a medium-sized fleet; its missiles and rockets were meant as a countermeasure to the enemy ships' anti-beam defense systems. It was hoped that the attack would cripple the enemy fleet or cause the fleet to retreat.

Each side of the upper torso has a compartment loaded with seven missiles.

Each knee armor has a compartment loaded with six missiles, which are of the same type as those in the shoulders.

Mounted on the right side of the backpack, it is a cannon that fires 360mm rockets.

Mounted on the left side of the backpack, it is also known as 'large-scale rocket launcher' and carries 22 missiles in total. Two long-range missiles are stored at the bottom and faces forward, and at the top are five compartments each carrying four missiles in a two-by-two arrangement. The missiles in the top compartments are the same as those in the shoulders and knees, but could also carry a variety of warheads if required.

With the increase in electrical supply thanks to the Type B's higher reactor output, the original Full Armor Gundam's right forearm-mounted twin beam rifle is replaced by a triple beam rifle. The triple beam rifle has an internal E-cap and three firing modes: semi-auto, full-auto and simultaneous fire from all three barrels.

A pair of beam sabers are stored on the left forearm armor, and they are also known as 'twin beam saber'. Each beam saber emits a blade-shaped beam to melt and cut through enemy armor.

Mounted on the backpack, it contains high-focusing, long-range sensor systems.

The existence of the Full Armor Gundam (Type B) was revealed in U.C. 0089, when some of the data surrounding it was made public. It was unclear whether it was actually built or if it only existed as simulation data, as was the case with the original Full Armor Gundam, and the Federation Forces refused to comment on the subject. 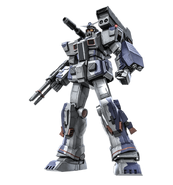 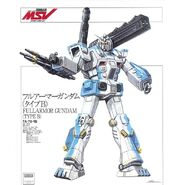