The FA-78[G] Full Armor Gundam Ground Type is a mobile suit from MSV-R.

Developed as part of a request for a specialized ground combat MS to be deployed against the Zeon Earth Attack Force, it used an add-on weapon system similar to the FA-78-1 Full Armor Gundam. The RX-78-1 Prototype Gundam serves as the base, and thorough weight reduction of the add-on parts is considered with an emphasis on mobility. Although it had less weapons than the Full Armor Gundam due to operating under Earth's gravity, it still possessed high firepower for the time.

A melee combat weapon that emits a beam blade, two are stored on the left forearm.

A large rocket-firing cannon that is mounted on the right side of the backpack, and on the left is a control aiming device.

Equipped on the left side of the backpack.

Development of the Full Armor Gundam Ground Type was halted during the simulation stage and the machine was not manufactured. 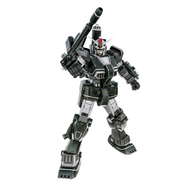