The FA-007GIII Full Armor Gundam Mk-III is the armor-equipped version of the MSF-007 Gundam Mk-III, and was designed to be able to fight without any drop in performance, thanks to the addition of extra sub generators. The emphasis of this form was offensive power rather than defensive power and can be seen in its main armaments, which removes the shield in favor of two distinctively large beam cannons fitted on both the unit's legs and shoulders.

Two additional Hyper Beam Cannon are mounted on each of the Full Armor Gundam Mk-III's legs. A direct hit from one of these weapons can destroy a MS with ease.

A pair of beam cannons are mounted on the backpack and they can rotate forward when needed. Powered by large E-cap in the backpack.

The shoulder-mounted shields of the Full Armor Gundam Mk-III also have offensive capability of their own with two beam cannons, which swivel up when being fired.

An addition to the Mk-III's offensive capability are two grenade launchers. These grenades are not very effective against ships, but are ideal mid-range anti-mobile suit weapons.

The beam saber is a small cylindrical device held in the mobile suit's hands when operated and is powered by a rechargeable energy capacitor. It emits a blade of plasma contained by an I-Field and is capable of cutting through any metal not treated with anti-beam coating. The Full Armor Gundam Mk-III has two beam sabers, and unlike the normal Mk-III they are not mounted on the shield.

The standard ranged armament of the many mobile suits, the beam rifle fires a particle beam that can penetrate any armor not treated with specific counter-measures. Same beam rifle as the normal MK-III.

Following the footstep of previous Gundam, the Mk-III also features an upgrade in form of a Full Armor package, which, despite its name, adds more to the MS's offensive capability than to its protection. 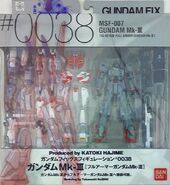 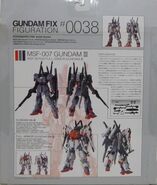