The Full Armor Zeta Gundam features a pair of head mounted vulcan guns. The purpose of the vulcan guns is to serve as a mid-close range defensive weapon against incoming missiles and other small lightly-armored targets.

The beam saber is the standard close-combat melee weapon of most MS. The pair employed by the Full Armor Zeta Gundam are stored in the side armor.

The existence of the Full Armor Zeta Gundam was supposedly leaked in a Anaheim Electronics pamphlet, however, it has been pointed out by enthusiasts as potentially being a hoax.[1] 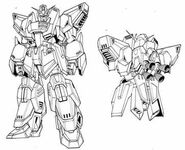 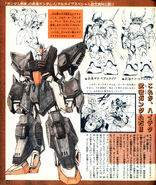 Retrieved from "https://gundam.fandom.com/wiki/FA-006ZG_Full_Armor_Zeta_Gundam?oldid=406684"
Community content is available under CC-BY-SA unless otherwise noted.