The F99 Record Breaker is a prototype MS developed by Strategic Naval Research Institute (SNRI). The XM-10 Flint, which was originally supposed to be sold to the Earth Federation, was not adopted because the machine could expose its relationship with Crossbone Vanguard during the Jupiter Empire's invasion of the Earth. The next mainstay mobile suit, which replaces the rejected Flint, is the Record Breaker. The main feature of the Record Breaker is the Minovsky Drive, originally the main engine of the spaceship Mother Vanguard, it has been successfully downsized for installation in a mobile suit. The Minovsky Drive was incorporated into four X-shaped thrusters that bore a passing resemblance for elegant insect wings. Other than the Minovsky Drive, the Record Breaker did not have any other innovative feature, with 75% of its parts being the same as the Flint/Crossbone Gundams'. SNRI officials planned to redesign the Record Breaker's head into that of a Gundam type MS to improve its selling points to the Federation.

Similar to the XM-10 Flint, the zambuster used by the Record Breaker has a different configuration from that used by the other Crossbone Gundams'. It has a new gun barrel attachment instead of the traditional buster gun add-on.

A man-machine interface developed from the psycommu system, it can directly convey data collected by the MS' sensors to the pilot in the form of sensory information.

Developed from the Minovsky Craft System, the Minovsky Drive System is a new form of propulsion technology that allows an equipped machine to accelerate to extremely high speeds both in space and in the Earth's atmosphere. With this system, an equipped mobile suit can travel the 600 million kilometers between the Earth Sphere to the Jupiter Sphere in about 150 hours, while ships designed to make such a journey would require a minimum of three months when the two planets are at their closest position to one another. One of the primary advantages of the Minovsky Drive System is that it does not require burning conventional fuel to operate and instead relies solely on the Minovsky particles produced by the Minovsky fusion reactor. Because the reactor continually produces Minovsky particles, the Minovsky Drive System theoretically has no operating limit as long as all components are working properly.

The Minovsky Drive System was first developed by the Buch Concern and installed aboard the ship Mother Vanguard as the "Sail of Light." In U.C. 0136, both SNRI and Anaheim Electronics were both developing Minovsky Drive technology for mobile suits nicknamed "Wings of Light," though SNRI developed the technology on their own while Anaheim developed it by studying the remains of the Mother Vanguard. Due to the events of U.C. 0136, all prototypes and data were lost and it would not be until 17 years later when the technology would be available again.

In U.C. 0136, SNRI built three Record Breakers piloted by SNRI test pilots Yon, Ulysses, and Derek who were taught by Minoru Suzuki. The machines and their pilots were stationed at an SNRI production and research facility on the moon.

When the Crossbone Vanguard pirates discovered that the Jupiter Empire was planning to use a colony laser on the Earth they realized that the only way to get to the Jupiter Sphere from the Earth Sphere with enough time to stop the first attack was to use a Minovsky Drive. However, the only ship with a Minovsky Drive, the Mother Vanguard had been destroyed three years prior. It seemed hopeless until Tobia Arronax remembered that SNRI was developing mobile suits that could use the Minovsky Drive. Knowing it was their only hope, the pirates quickly made their way to the moon base to plead their case to SNRI to let them use the mobile suits.

Though the SNRI officials were hesitant, they ultimately agreed to let the Crossbone Vanguard use the Record Breakers for their mission. However, before any action could be taken, the Jupiter Empire attacked with several Amakusas, piloted by normal pilots instead of bio-brains, and a new Cornigs piloted by Callisto's Shadow. The Record Breakers and the XM-X1 Crossbone Gundam X-1 Kai Kai "Skull Heart" sortied against the Jovian Forces. Tobia warned the pilots of the Record Breakers, telling them that they couldn't risk the mobile suits being damaged. Despite not having any combat experience Yon, Ulysses, and Derek showed the power of the Record Breakers by out-flying the Amakusas and picking them off one by one, destroying most of them without taking any damage.

However, the pilots were soon outmatched by Callisto's Shadow and his Cornigs. Callisto's Shadow had an unnatural ability to predict the movements of the Record Breakers, combined with the unusual movement capabilities of his own machine made him impossible to hit, and he quickly destroyed the Record Breakers, killing the pilots except for Derek, and severely damaging the Skull Heart. 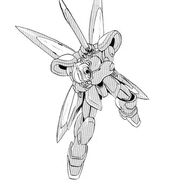 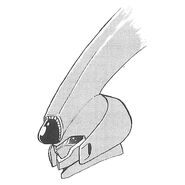 Retrieved from "https://gundam.fandom.com/wiki/F99_Record_Breaker?oldid=474801"
Community content is available under CC-BY-SA unless otherwise noted.