The F90V Gundam F90 VSBR Type is one of the many mission packs developed for the F90 Gundam F90 by the Strategic Naval Research Institute. The VSBR Type is designed to improve the Gundam F90's overall combat ability with the addition of two variable speed beam rifles, a mega Gatling gun, a beam shield, additional rocket thrusters and verniers, and a more powerful ultracompact Minovsky type fusion reactor. The additional equipment increases the Gundam F90's offensive abilities, defensive abilities, and its speed and mobility. The backpack features a built-in sub-generator that allows simultaneous use of the beam shield and VSBR weapons, both of which require large amounts of energy to function. However, the beam shield may suffer from stability problems depending on the state of the mobile suit. These technical issues would pose a challenge for future development of the VSBR. Technologically, the F90V Gundam F90 VSBR Type is the prototype of the F91 Gundam F91.

The F90V VSBR Type is equipped with a pair of head mounted Vulcan guns to serve as a mid-close range defensive weapon. While they do little damage against the armor of a mobile suit, they are useful for shoot down incoming missiles, small attack vehicles, or to deter closing in enemy machines.

A pair of high-output large beam rifles mounted on the suit’s backpack, and powered directly by its reactor. These experimental weapons can fire either low-speed beams with high destructive power, or high-speed beams with high penetrating power, sufficient to destroy two MS with one shot or pierce a beam shield. The two VSBRs typically slide under the shoulder when deployed. Later, this weapon is also used by its successors, the F91 Gundam F91 and the RXF-91 Silhouette Gundam.

A gatling gun is mounted on the right forearm. This weapon able to take down a thinly armored enemy mobile suit.

The beam saber is the standard close-combat weapon of many mobile suits, it emits a blade of plasma contained by an I-field that can cut through any physical armor that have not been treated to resist it. The beam saber is powered by a rechargeable energy capacitor, and the F90V VSBR Type has two beam sabers stored in the left hip armor.

An F90V was assigned to the Anti-EF Organization Extermination Force. It was piloted by Bergh Scred. 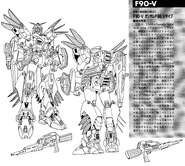