The F90II Gundam F90II is a mobile suit that appears in the original design series Mobile Suit Gundam F90.

The F90II Gundam F90II was built from the recovered OMS-90R Gundam F90 by Strategic Naval Research Institute (SNRI). Its speed and maneuverability is significantly higher compared to the original F90 Gundam F90 because of the added thrusters and a more powerful reactor. However, the most notable feature of the F90II Gundam F90II is the prototype Bio-Computer System, which replaces the original A.I System. This psycommu-based system is able to raise the suit's overall capability to an even greater level by increasing the pilot's awareness to the battlefield. The Gundam F90II retains the hardpoints and weapon rack of the Gundam F90, and can be equipped with Mission Packs. In particular, it has been shown to use the Type I (Intercept Type) and Type L (Long-Range Type).

The F90II is equipped with a pair of head mounted Vulcan guns to serve as a mid-close range defensive weapon. While they do little damage against the armor of a mobile suit, they are useful for shoot down incoming missiles, small attack vehicles, or to deter closing in enemy machines.

The beam saber is the standard close-combat weapon of many mobile suits, it emits a blade of plasma contained by an I-field that can cut through any physical armor not treated to resist it. The beam saber is powered by a rechargeable energy capacitor, and the F90II has two beam sabers stored on the backpack.

The beam rifle is the standard ranged weapon of many mobile suits, it fires a compressed mega particle beam which can penetrate any physical armor, leading to the saying that any mobile suit equipped with a beam rifle had the power of a battleship at its disposal. The F90II's beam rifle is powered by a replaceable e-pac and can mount on the waist weapons mount.

The F90II is equipped with 11 Hardpoints for mounting various external equipment and/or armaments to meet specific needs or combat situations, thus making the F90II an extremely versatile MS and could operate in various conditions.

A new kind of man-machine interface, the Bio-Computer is a next generation device developed from the psycommu system, but places less strain on its human operator. It is originally intended to help the disabled, but its development is ultimately funded by the EFF for combat purpose. As its name implies, the Bio-Computer is similar in structure to a human brain, and its operating processes resemble human thoughts and feelings. Rather than merely displaying data collected by the MS’ sensors on a computer monitor, the Bio-Computer can relay it directly to the pilot in the form of sensory information, so what the machine "feels" can also be experienced by the human operator. Like the original psycommu system, the Bio-Computer also allows the pilot to control the MS using thoughts alone. However, the full latent potential of this system can only be tapped by a Newtype pilot.

During the aftermath of the Earth Federation Forces (EFF)' battle with the Mars Zeon Army in UC 0120, the EFF recovered the remains of the stolen OMS-90R Gundam F90 and sent the unit back to the SNRI to be reconstructed. The mobile suit was rebuilt into the improved Gundam F90II, following the concept of optional mission pack versatility of the original Gundam F90. Despite being in its basic configuration, the F90II still boasted a significant improvement in its overall performance with additional speed and maneuverability. The F90II served as the first testbed for the revolutionary new Bio-Computer System, a derivative of the Psycommu system which through advanced computations, relayed tactical data directly into the pilot's brain. This system, which not only allowed a new pilot to more easily adapt to the Gundam F90II thereby increasing its handling qualities, it also decreased the pilot's reaction time, it would later be incorporated into the F91 Gundam F91. 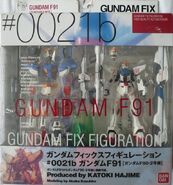 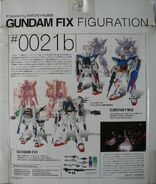 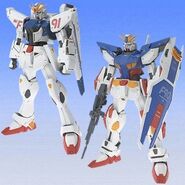