In U.C. 136, a F90 Gundam F90 unit was equipped with a modified Intercept Pack originally designed for the F90II Gundam F90II to battle the Jupiter Empire. Because of the severity of the mission, the mobile suit replaced the beam lancer with a solid-state shot lancer capable of firing nuclear missiles.

The F90I-I is equipped with a pair of head-mounted 60mm Vulcan guns, which serve as mid-close range defensive weapons. While they do little damage against the armor of a mobile suit, they are useful for shoot down incoming missiles, small attack vehicles, or to deter closing in enemy machines.

Instead of the Gundam F90II's beam lancer, the mobile suit carried a shot lancer more commonly found on Crossbone Vanguard's models. It is designed for combat in and around space colonies, and uses electromagnetic acceleration to drive its tip through the enemy's armor, and the spearhead itself can also be launched like a missile.

Built into the shot lancer, the beam rifle fires a compressed mega particle beam which can penetrate most physical armor not treated to resist it.

The most powerful weapons in the Gundam F90I Intercept Type Jupiter Battle Specification are the five nuclear missiles arranged around the base of the shot lancer, each of which could cripple several battleships with a proximity hit.

A melee weapon that emit a blade of plasma contained by an I-field that can cut through most physical armor not treated to resist it. It is powered by a rechargeable energy capacitor, and the F90I-I is equipped with two beam sabers on the backpack.

A 15m tall shield with integrated sub-flight system functions, its large size serves to protect the mobile suit during atmospheric entry. Besides having several thrusters and attitude control verniers, the shield also has a pair of retractable wings the can be deployed when required.

The Flight Shield possesses minor offensive capability with a pair of Machine Cannons that are stronger than the Vulcan Guns.

During the events of Mobile Suit Crossbone Gundam: Steel 7, a Gundam F90 was modified into the Gundam F90I Intercept Type Jupiter Battle Specification for the final mission to destroy the Jupiter Empire's colony laser "Shinvatsu". Although the mobile suit lost its legs in the battle, it survived and was recovered. 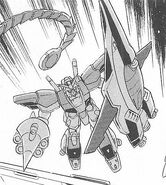 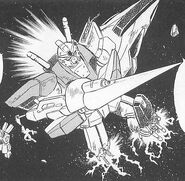 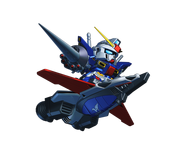 Retrieved from "https://gundam.fandom.com/wiki/F90I-I_Gundam_F90_Intercept_Type_Jupiter_Battle_Specification?oldid=458972"
Community content is available under CC-BY-SA unless otherwise noted.