The F90 Gundam F90 Destroid Type is one of the variants developed for the F90 Gundam F90 by Strategic Naval Research Institute between U.C 0110s and 0120s. The F90D Gundam F90 Destroid Type (or "D-Type" for short) is designed to overpower the enemy's main force and has high mobility as well as heavy firepower. Its typical operating pattern involves first suppressing the various primary targets then mopping up the others through melee combat. Its mobility is heightened thanks to the booster packs on the legs, while its heavy firepower is provided by the large number of close combat firearms, such as Gatling gun, crackers, grenades and rockets.

The F90 D-Type is equipped with a pair of head-mounted Vulcan Guns to serve as a mid-close range defensive weapon. While they do little damage against the armor of a mobile suit, they are useful for shoot down incoming missiles, small attack vehicles, or to deter closing in enemy machines.

The beam saber is the standard close-combat weapon of many mobile suits, it emits a blade of plasma contained by an I-field that can cut through most armor not treated to resist it. The beam saber is powered by a rechargeable energy capacitor, and the F90 D-Type has two beam sabers stored on the backpack.

Mounted on both of the F90 D-Type's shoulder hardpoints.

Mounted on both of the F90 D-Type's forearms.

A ballistic weaponry, the firearm is belt-fed and mounted on left side of torso with ammo drum and weapon mount assembly attached to the rear waist weapon mount.

Cracker Grenades, which were first used by the MS-06 Zaku II during One Year War, are explosive weapons designed to be thrown or launched by the MS and detonate after a set amount of time. It then breaks into several smaller munitions over a wide area. The F90 D-Type stores two such grenades on the front skirt armor hardpoints.

Shields are essentially thick slabs of armor that a mobile suit can use to absorb the impact from attacks that, for whatever reason, cannot be dodged. However shields can only withstand so much pressure before becoming damaged themselves. Shields are also treated with an anti-beam coating to defend against beam weapons, however the coating gets gradually burned away each time a beam strikes it until it is rendered useless. When not in use, it is stored on the back.

The F90D Gundam F90D Destroid Type underwent field testing in U.C 120, and it was stationed on Ra Cailum-class Admiral Tianem as part of the 13th Experimental Battle Group. Its pilot was Def Stallion, an employer of the SNRI The Admiral Tianem came into conflict with Mars Zeon during a test flight near Side 4 on October 28. And although the E.F.F emerged victorious in this brief conflict, it costed them both of the F90 Gundam F90 units.

Another Gundam F90 unit was built between U.C 120 and U.C 122, and it participated in the war with the Mars Zeon, who, under the leadership of Charles Rochester and their ally the Crossbone Vanguard, had began in their invasion of Earth. The Gundam F90 unit was piloted by Bergh Scred. 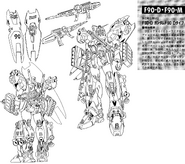 Retrieved from "https://gundam.fandom.com/wiki/F90D_Gundam_F90_Destroid_Type?oldid=443803"
Community content is available under CC-BY-SA unless otherwise noted.