The F90A Gundam F90 Assault Type is one of the many mission packs developed for the F90 Gundam F90 by the Strategic Naval Research Institute. The Gundam F90 Assault Type (or "A-Type" for short) is designed for extended travelling and combat operations. It is capable of infiltrating deep into enemy territory and then launch pinpoint attacks on critical facilities. The A-Type has flight capabilities thanks to the two backpack-mounted mobile units equipped with the Minovsky Craft system, as well as the large capacity propellant tanks on the forearms and legs. When flying, both shoulders are fixed to enhance flight stability and the AMBAC is controlled via the legs. Although it is supposed to surpass the F91 Gundam F91 in terms of speed, there are concerns about its defensive capabilities.

The F90 A-Type is equipped with a pair of head-mounted Vulcan guns to serve as a mid-close range defensive weapon. While they do little damage against the armor of a mobile suit, they are useful for shoot down incoming missiles, small attack vehicles, or to deter closing in enemy.

The beam saber is the standard close-combat weapon of many mobile suits, it emits a blade of plasma contained by an I-field that can cut through most armor not treated to resist it. The beam saber is powered by a rechargeable energy capacitor, and the Gundam F90 A-Type is equipped with two beam sabers stored on the backpack.

A handheld anti-fortress weapon, the Mega Beam Bazooka is stored on the rear waist weapon mount when not in use. It is powered by an E-Pac at the rear, and spare E-Pac can be stored on the side skirt armor.

Mounted on the backpack-mounted mobile units are a pair of Machine Cannons and they are more powerful than the vulcan guns.

The Gundam F90A Assault Type underwent field testing in U.C 120, and it was stationed on Ra Cailum-class Admiral Tianem as part of the 13th Experimental Battle Group. Its pilot was Def Stallion, an employer of the Strategic Naval Research Institute. The Admiral Tianem came into conflict with the Mars Zeon during a test flight near Side 4 on October 28. And although the E.F.F emerged victorious in this brief conflict, it costed them both of the F90 Gundam F90 units.

Another Gundam F90 unit was built between U.C 120 and U.C 122, and it participated in the war with the Mars Zeon, who, under the leadership of Charles Rochester and their ally the Crossbone Vanguard, had began in their invasion of Earth. The Gundam F90, and the F90A Gundam F90A in particular, was piloted by Bergh Scred. 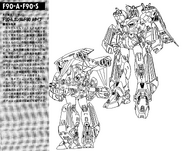