The Gundam F89 was an experimental mobile suit built by SNRI to collect data and test equipment for their "Formula Project" line of miniaturized mobile suits, particularly for the F90 Gundam F90. Despite being a testbed unit, it boasts high performance for an 18-meter tall MS, and is said to have performance on par with the F90 Gundam F90. The frame of the Gundam F89 is newly designed, however it is compatible with MS parts from Anaheim Electronics. To distinguish the two units, one was painted in red and blue colors and features a curved v-fin, while the other unit remains white with a straight v-fin.

Prototypes of the Gundam F90's Mission Packs were produced for the Gundam F89, a High-Mobility Type pack and a Long-Range Attack Type pack. The High-Mobility Type is equipped with a backpack with two propellant tanks and additional thrusters, while the Long-Ranger Attack Type backpack was equipped with two prototype Beam Cannons that was the prototype of the VSBR.

A large melee weapon that doubles as a beam rifle.

A standard beam saber, it is powered by a rechargeable energy capacitor. The F89 has two beam sabers stored on the backpack when equipped with its High-Mobility Type pack.

A powerful beam weapon used by the F89's Long-Ranger Attack Type. It is powered by the Gundam F89's generator and was later used to develop the VSBR.

A Beam Rifle of the same model as the RGM-119 Jamesgun was used during a mock battle. It is powered by a rechargeable energy cap.

When SNRI first began developing miniature mobile suits, they wished to test their current technical capabilities. To accomplish this, two testbed Gundam F89 units were produced. Data was collected on technologies to be used in the development of the Gundam F90.

One of these units was piloted by Gideon Brondan in U.C. 0111 during a mock battle with the Gundam F90 Flight Type. Following this mock battle, the Gundam F89 served as an escort MS for the F90 test team.

One of the two units' frames was later salvaged in U.C. 0168 and used in the Anchor Mixing Build MS, while the other unit was refurbished by Frank Oz and given to pilot Jean Dauvin. 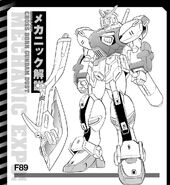 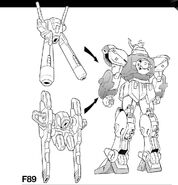 On the cover of Cross Born Gundam: Dust volume 7.

Retrieved from "https://gundam.fandom.com/wiki/F89_Gundam_F89?oldid=459939"
Community content is available under CC-BY-SA unless otherwise noted.