The RXR-44 (F-50D) Guntank R-44 is a variable mobile suit that appears in the Mobile Suit Gundam F91 movie. It is considered a distant descendant of the RX-75-4 Guntank from the One Year War.

An early miniature transformable mobile suit developed by Anaheim Electronics, the RXR-44 (F-50D) Guntank R-44 was based on an older transforming artillery mobile suit, the D-50C Loto, a special operations mobile suit created in UC 0096. A feature carried over from the D-50C Loto, not shared by most other Mobile Suits, was its main torso containing enough room for four personnel to fully operate the unit and transport a small ground force.

A 4-tube missile pod is mounted on each forearm.

A small firearm is mounted in the tip of each finger. Despite this, the hands are fully articulated.

During the early second half of the Universal Century, the Earth Federation came to a period of peace it had not known since the beginning of the Universal Century. Because of that peace, there was no need for a stealth/infiltration mobile suits and the Loto was retired. At this time, Anaheim Electronics created the Guntank R-44, a new small-scale transforming artillery mobile suit based on the Loto. The overall design proved to be a failure, however, and the Guntank R-44 never made it past the prototype stage. It is unknown how many prototypes were manufactured, but it is confirmed that at least one unit later came under the ownership of Roy Jung, curator of a war museum at the Frontier IV colony. Roy refurbished the unit and personally gave it the unofficial model number RXR-44 (with 44 being his age when he acquired the suit around U.C. 0107). Roy would take his prized Guntank R-44 into battle with Seabook Arno in a futile attempt to help repel the Crossbone Vanguard forces invading the colony. 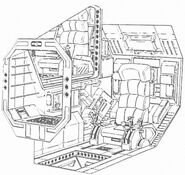 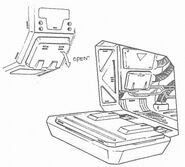 Guntank R-44 as it appears in Gundam Build Fighters Try 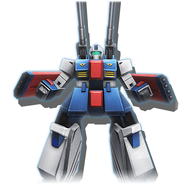