Integrated as part of an emergency program triggered for a crisis in Earth 0's future, Aire and Tereno discovered within a virtual world which predicts the distant future, a special link which was deeply connected to them. That machine, a glimmer of hope yet to be born - the Extreme Gundam.

Sthesia Awar discovered the machine and redesigned it for her personal use to fight alongside Leos Alloy after their battle with Treme, now known as the reborn EX-. While Sthesia's combat skills are lacking, the Excellia's strengths more than make up for them. The Kreuz des Sudens beam rifle possesses a unique long barrel which can unfold into a cross formation to reveal several parallel beam guns and armed with a beam sword, it's capable of taking on close-range combatants. It is also equipped with two types of bit weapons; Sphere Bits, which are energy missiles launched from the hand and the Shield Bits mounted on the shoulders to protect allies or herself from incoming attacks. By far its most unique ability is the Link Rephaser, which allows Sthesia and her Gundam to link with her Dark counterparts to perform attacks unique to the Extreme Gundam R's Rephaser incarnations

The unit's standard long ranged armament. In its normal folded form, it functions like an ordinary beam rifle or can fire a large devastating beam.

A set of sphere bits used to remotely attack any opponents.

A set of round shield bits that can protect the Excellia from enemy attacks.

The Excellia can form an snowflake-like shield in front of it to defend against attacks.

Invokes the power of the Dark Sthesias allowing the use of 1 attack from each of the 4 Extreme Gundam Rephaser variants; from the Tachyon, it brandishes the Halbmond and charges at the opponent. From Carnage, the Gundam fires a large orange beam of energy from both hands. Using Ignis, it fires three spheres of freezing energy in a fanning formation to immobilize enemies and through the Mystic, it twirls the Halbmond above its head, creating a powerful whirlwind that sends enemy mobile suits flying into the air.

This unit's Burst Attack, it fires a fanning radiating beam from the Kreuz des Südens in cross mode. 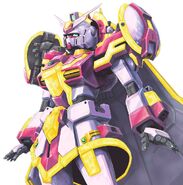 Retrieved from "https://gundam.fandom.com/wiki/Extreme_Gundam_Type_Sthesia_Excellia?oldid=436184"
Community content is available under CC-BY-SA unless otherwise noted.