The Extreme Gundam Type Leos II Vs is a scaled down version of the Extreme Gundam EXA Phase, integrating all of the armor packs into the unit's frame and scaling it down for ease of use. Due to this, the color of the Mobile Suit changes as well as its design and the glow on some parts. Because the parts being integrated to the mobile suit, Leos can use all of the wear pack's abilities, without the fear of being dead weight. The performance of the suit also outperforms the EXA phase in overall speed, mobility and power, making it the ultimate compilation of all Gundam-Type technology Cosmic Compiler has done.

The Type Leos II Vs can use all of the weapons from the 3 wear packs, either separate or simultaneously. It is also equipped with a modified Beam Rifle which is derived from the Eclipse Phase's Variable Psycho Rifles.

Developed from the Agios Funnels. When deployed, Leos uses his thoughts to guide the funnels to attack its opponents using specialized beam guns. As an improved version of the Agios Funnels, the Valiant Surface's funnels can teleport into the vicinity of an enemy target without the unit needing to be powered up first. Much like the ZGMF-X20A Strike Freedom Gundam, they can produce an effect akin to the Wings of Light either when deploying the funnels or during flight in Burst Mode.

Equipped on the back, they are a pair of beam cannons that were derived from the Eclipse Phase's weapon system and are similar to the ZGMF-X10A Freedom Gundam's Xiphas railguns. When not in use, they can function as additional verniers in much the same way. They can either fire sustained large beams of energy or an explosive blast from both beam cannons in Burst Mode.

The Extreme Leos is equipped with a special dual-bladed solid weapon that generates a blade of beam energy with a blue color. This weapon can also be separated into two beam swords for dual-handed combat. When not in use, each of the swords are stored on each of the Gundam's wings.

The unit's standard long ranged armament, it is derived from the Eclipse Phase's Variable Psycho Rifles. The portions of the Agios Funnels and the two Blade Bits can also combine with the Valiant Rifle to form a much stronger weapon called Divine Blaster, mimicking the functionality of the GNT-0000 00 Qan(T)'s GN Sword V.

A set of smaller bits stored on the Valiant Rifle that can come together to form a force field in front of the Extreme Leos. When in Burst Mode, the bits automatically protect the unit while firing.

A special system allowing the Type Leos II Vs to replicate the Xenon Phase's attacks. When activated, the arm guards opens up into a pair of Fire Bunkers, allowing it to execute various fist attacks.

Based on the Psycho-Frame system, this allows the pilot to manipulate its various bit weapons.

A side shot of the Extreme Type Leos II Vs

A front shot of the Extreme Type Leos II Vs for Extreme Vs. Maxi Boost 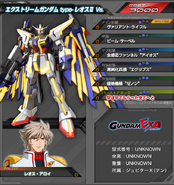 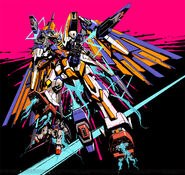 With Gundam in Mobile Suit Gundam: Extreme VS. 2 Artwork

Retrieved from "https://gundam.fandom.com/wiki/Extreme_Gundam_Type_Leos_II_Vs?oldid=471782"
Community content is available under CC-BY-SA unless otherwise noted.