A Long Range Bombardment Armament of the Extreme Gundam Type Leos developed from the data of the XXXG-00W0 Wing Gundam Zero as well as GNR-001D GN Arms Type-D (which Lockon docked with GN-010 Gundam Zabanya to used against him). Ex also comment how it appear to use data from his Extreme Gundam Carnage Phase but modified into a more orthodox design. On this configuration, the shoulders of the unit were slightly modified and equipped with various long ranged weaponry, making it a counterpart to the Extreme Gundam's Carnage Phase. It also gained a new system ability for the Extreme Gundam Type Leos called Burst Mode, that allows it to amplify the weapon's firepower. The initial downside however is that the unit can't be used for close combat.

Being a long ranged unit, the Eclipse Phase is equipped with two Variable Psycho Rifles, that can fire beam shots, two Blaster Cannons, Eclipse Clusters and Carnage Strikers, the last two of which are available in Extreme Evolution. It is also armed with a jamming system that allows it to disrupt incoming missile blasts by destroying its targeting signal.

Specialized beam rifles developed for the Eclipse Phase, which is developed from the Wing Zero's Twin Buster Rifle. While the rifles are capable of firing regular beam shots, they can also be combined into a configuration called Cross Buster for even more power.

Equipped on both shoulders, they are powerful beam cannons that pivot towards the front.

Located just above the hips, they can be fired while the Extreme Gundam's hands are still carrying the Variable Psycho Rifles, effectively functioning as the CIWS or head vulcans found in traditional Gundams. In Extreme Evolution, the machine carries an infinite supply of them.

The artillery pack located on the back. Much like the original Extreme's Carnage phase, this multi-purpose weapon has two identical shapes, but wildly different functions and weapons. The left one, the Eclipse Cluster, can be deployed as a micro missile salvo to bombard enemies. The right one, the Carnage Striker, unfolds into an extremely powerful long range beam cannon. It can also fire off a dark sphere of energy which discharges a large explosion, stunning any mobile suits caught in the blast. Only available in Extreme Evolution.

A new system integrated into the Extreme Gundam's frame that draws out the full power of the phases. When used for the Eclipse Phase, the components not only glow, but it also adds new weapons, the Carnage Striker and Eclipse Cluster, onto its back which possesses many of the same weapons as the Carnage Phase. 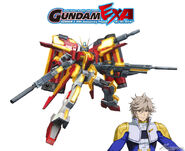 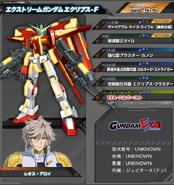