An Assault configuration developed from the ZGMF-X20A Strike Freedom Gundam, the Agios Face of the Type Leos was designed in mind to be an equal counterpart to the original Extreme Gundam's Ignith Phase: as such, it dons a set of glowing wings equipped with a funnel system, which houses 8 funnels, and a beam rifle with greater range. Rather than simply mimic Ignith Phase's framework, the Agios Face was made by Sthesia's individual reasoning and something ex- could not comprehend, faith in humanity.

Equipped with this Armor Pack, the Type Leos bears a striking resemblance to the Strike Freedom Gundam, both in terms of its wings' structure and its remote weapons, which even mirrors the Freedom's own 8 Super DRAGOON Pods.

The unit's standard close combat armaments. The beam sabers presumably have an high output, allowing them to slice a mobile suit in half. Leos has also been seen combining the two sabers together to form a larger beam sword for greater cutting power.

The unit's standard long ranged armament, which can hold up to several shots and can adjust its power output when necessary. At higher outputs, the rifle's beam shots produce a sparkling trail.

The unit were equipped with an standard shield and it was used to defend itself against vulcan fire and missile attacks.

Developed from the Super DRAGOON Pods, these remote controlled weaponry were equipped on the wings of the suit. When deployed, Leos uses his thoughts to guide the funnels to attack its opponents using specialized beam guns. In Extreme Evolution, the Agios Funnels can instantly warp in the immediate vicinity of a targeted foe when deployed, dramatically increasing their potential. They can also form a temporary barrier, group together to fire larger beams or overload circuits, momentarily stunning the target. Additionally, the funnels themselves can combine together to form a large sword called Sacred Sword and slash targets with their bladed edges, similar to the Fangs and Bits found on GN-powered Mobile Suits such as GNW-002 Gundam Throne Zwei and GNT-0000 00 Qan(T).

A new system integrated into the Extreme Gundam's frame that draws out the true power of the phases. When used with the Agios, it causes the wings, the chest and skirt armor to glow. The wings themselves can now be deployed and give off a sparkling effect similar to the ZGMF-X10A Freedom Gundam's HiMAT wings. The beam rifle's shots also possess a similar property as well. Lastly, the Agios Funnels' power is fully developed, gaining the ability to teleport and group together for a multitude of purposes.

The word Agios or Άγιος is a Greek word, referring to masculine form of a sacred person or a saint. This falls in line with both the units glowing wing design as well as Leos' more soft-spoken tone as well as the name of his moves when in Extreme Evolution. 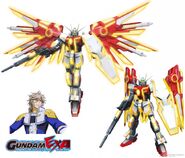 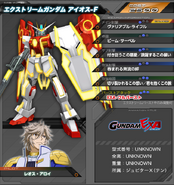 Retrieved from "https://gundam.fandom.com/wiki/Extreme_Gundam_Type_Leos_Agios_Phase?oldid=471005"
Community content is available under CC-BY-SA unless otherwise noted.