The Extreme Gundam Type Leos is a prototype multi-mode mobile suit and the brother variant of the Extreme Gundam. The unit was featured in the Mobile Suit Gundam: Extreme Vs. Full Boost arcade game and the Gundam EXA manga. The unit is piloted by the series' protagonist, Leos Alloy.

Developed at the same time as the Extreme Gundam, the Extreme Gundam Type Leos is the second unit created for space travel and data gathering. It's designed to manifest itself in the virtual worlds of General Answer and allow Leos and Sthesia to dive into the different worlds. The head unit is unique as it contains four different head formations for each of its armor packs though it never uses them. The unit's standard armaments includes two beam sabers and two beam daggers for close combat and a Beam Gun for taking down enemies from afar.

The Extreme Gundam Type Leos is similar to its brother unit - it's designed to equip several armor packs to suit multiple combat situations. However, unlike the original unit, Leos' version is based around evolution, improving itself with armor packs that grow stronger over time, eventually producing the same glowing frames, though with a unified gold light.

The unit's standard close combat armament, capable of slicing a mobile suit in half.

The beam daggers share the same basic system as that of beam sabers but are adjusted to have a shorter blade. Mainly used as throwing weapons.

The Extreme Gundam Type Leos is also armed with a standard Beam Gun, which can hold up to several shots and can adjust its power output when necessary.

The unit is equipped with an standard shield and used to defend itself against vulcan fire and missile attacks.

The Extreme Gundam also has Armor Packs depending on the combat situations. These armor packs are scaled down versions of the packs used by the original Extreme Gundam and are developed using battle data gathered from other Gundams. The Xenon Phase Armor Pack grants it exceptional close combat abilities with the usage of Fire Bunkers and a scaled down Tachyon Slicer. The Eclipse Phase Armor pack grants it superior long-range capabilities with twin "variable psyco rifles" and carnage strikers capable of firing off both tactical strikes and gravity wells. The Agios Phase Armor pack features a combination of the two, utilizing a set of teleporting funnels that can function as both automated beam guns and swords.

The Extreme Gundam can emit a force field of data that speeds up the mobile suit's Evolution.

The Extreme Gundam Type Leos was built by an unknown origin after the completion of the Extreme Gundam, having also been designed for space travel but incorporated a standard pilot cockpit versus the first unit's unmanned cockpit schema. However, because of the apparent shortage of human candidates, the unit was put into storage. During the events of the manga, the unit falls into the hand of the organization Cosmic Compiler. It was later painted red and piloted by Leos Alloy in pursuit of AI pilot, EX-, who pilots the Extreme Gundam.

The Extreme Gundam Type Leos first debuts in Universal Century mission. When the battle between Marion Welch's RX-79BD-3 Blue Destiny Unit 3 Kai and Zero Murasame's RX-178-X0 Prototype Gundam Mark II broke out, Leos try to intervene but his RX-78GP04G Gundam "Gerbera" got shot down. On Jupiter X, Sthesia Awar checks the record of the event and found that all combatants involved with this battle will be killed (which now would include Leos as well). To prevent this, Sthesia ask Pigna Hershey to dive into the Universal Century and deliver the Extreme Gundam to Leos. 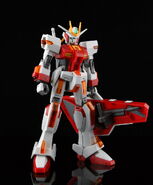 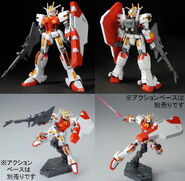