Unlike the previous three phases which all specialized in a specific field of combat, the Mystic Phase excels in all areas, armed with close and long range weaponry. The pack uses a unique quadruped leg form with wings, giving it the appearance of a winged centaur with a multipurpose dual lance as its weapon of choice. Similar to the packs also, the Mystic Phase uses a specific element tied to its abilities, in which case, utilizes wind-based attacks, many of them appearing magical in nature. When using this pack, the Extreme Gundam's head transforms into a shape similar to the one used for the Ignis Phase, though its face is more fierce and features the familiar beard piece, albeit colored white. It also features an additional decorative crown atop its v-fins.

The Mystic Phase is armed with a dual-bladed solid steel lance that gives it superb melee capabilities, useful for stabbing and slashing. The Extreme Gundam can swing and twirl it with ease, often creating violent wind torrents, miniature tornadoes or whirlwinds to blow enemy units away. It can also transform into a bow to fire high-powered beam shots.

The wings of the Mystic Phase are armed with funnel-like weapons similar to the RX-105 Xi Gundam's Funnel Missiles. They are also capable of replicating the Moonlight Butterfly effect from the CONCEPT-X 6-1-2 Turn X to damage enemy units in a very wide area.

The Extreme Gundam is a pilot-less mobile suit. Inside it is a bodiless core named "EX-". 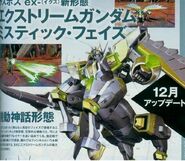 Details about the Mystic Phase
Retrieved from "https://gundam.fandom.com/wiki/Extreme_Gundam_Mystic_Phase?oldid=347412"
Community content is available under CC-BY-SA unless otherwise noted.