The Extreme Gundam Mk-II AXE (エクストリームガンダム Mk-II アクス) is a Prototype Multi-Mode mobile suit and upgrade variant of Extreme Gundam. It is also the core unit of Extreme Gundam Dystopia Phase Mobile Armor. The unit was featured in the Mobile Suit Gundam Extreme Vs. Maxi Boost ON arcade game and the Gundam EXA VS manga. This unit is piloted by Ex Treme.

The unit's standard close combat armament, capable of slicing a mobile suit in half.

Extreme Gundam Mk-II AXE is armed with a multi-purpose Shield Sabers, it can transform from two-in-one shield into twin sabers. These weapons usually stored on its backpack when it's not use. In shield mode, Extreme Gundam Mk-II AXE can use two shields on its arms to block any physical attack, and it can combine into single shield to deflect any incoming beam attacks. In twin beam sabers, it can not only use shields as a close quarter combat weapon, but it can generate larger beam sword capable of cutting any MS in half.

Extreme Gundam Mk-II AXE can fire its beam cannon from its mouth when the faceplate is opened.

When operating at full capacity the machine is capable of generating six seraphic wings akin to the Moonlight Butterfly or Wings of the Skies. When generating these wings all of its abilities gain an upgrade: the energy balls come in groups of five instead of three, the copies it generates are much more solid in appearance and the unit itself moves with greater speed.

The Gundam is capable of moving at speeds fast enough to leave behind afterimages to distract opponents and draw enemy fire. It also shows the ability to project hard-light copies of other Gundams to attack in its stead such as Strike Freedom firing shots from its combined beam rifles or 00 Gundam Seven Sword attacking with the GN Buster Sword.

With a gesture, it can create gargantuan pillars of light via the laser cannons in its hands.

It can fire two types of energy blasts from its hands---a series of orbs that damage enemy suits or electrified ones that paralyze a suit and leave it open for a followup saber slash. 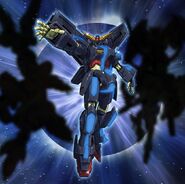 Retrieved from "https://gundam.fandom.com/wiki/Extreme_Gundam_Mk-II_AXE?oldid=458874"
Community content is available under CC-BY-SA unless otherwise noted.