The Gundam Wiki
Register
Don't have an account?
Sign In
Advertisement
in: Characters, Not Applicable/Specified characters, Female

Eve (イヴ, Ivi?) is a character in the anime Gundam Build Divers Re:RISE.

Eve is a kind and gentle girl who cares about the feelings of both people and Gunpla. She cares a lot about Hiroto, however, she keeps her EL-Diver identity a secret.

Like her younger sister Sarah, she is able to understand Gunpla's feelings due to her EL-Diver abilities.[1]

Two years ago, Eve encountered Hiroto in one of GBN's battlefields and they developed a close relationship. Some time after the first Coalition of Volunteers battle, Eve worked in secret to fix outbreaks of bugs in GBN caused by the existence of herself and her younger sister, Sarah. Having done all she could, she asked Hiroto to erase her, and thereby reducing the load on GBN's systems and giving Sarah a better chance at survival.[2] Before her disappearance, she also requested that he help other EL-Divers like her. During the Second Coalition of Volunteers Battle, Hiroto nearly shot Riku and the damaged Gundam 00 Sky before Riku could reach Sarah, but he recalled Eve's last words and adjusted his aim, shooting at the ground instead.

It was later hinted that some of Eve's data may have been used to create May, Hiroto's fellow Force BUILD DiVERS member, as she was revealed to be born with a pendant identical to the unique earring that Hiroto had gifted Eve.

Eve's younger sister. When Sarah caused bugs due to some of her abilities within the system, those bugs took on her form in black colors. Eve would approach these bugs and absorb them into herself. However, doing so caused her visible pain and eventually turned Eve into a massive game breaking bug. To stop further damage to GBN, Eve decided to sacrifice herself.

A diver whom Eve meets in GBN. During their time together in GBN, the pair developed an irreplaceable relationship until Eve was returned to the sea of data by Hiroto, at her request. She is very important to Hiroto and the time they spent together is his most precious memory.[3] 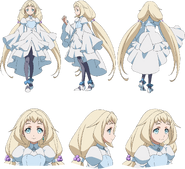 One of the Ancients sharing a similar appearance.