The situation for Zeon is getting desperate after the Federation successfully sieges the space fortress Solomon. Upon arriving at A Baoa Qu, Jotunheim is visited by Col. Herbert von Kuspen who immediately try to assume command of the ship but meets resistance from both Monique and Prochnow. The ship is then reinforced with "Principality's elite soldiers" — turns out to be a group of young cadets forcefully mobilized from the homeland. To Monique's shock, the most enthusiastic soldier out of the inexperienced recruits is nobody other than her own younger brother Erwin.

The Jotunheim is then dispatched to lunar space and ordered to test and perfect the MP-02A Oggo mobile pods. At Granada airspace they run into a small Federation forces, and Erwin leads a squad of three Oggos to engage in combat. After fierce fighting, it all ends up with only Erwin and a Ball pilot remaining, both have their weapons malfunctioned. Though he manages to convinces the Federation pilot to surrender, a stray shot from a Federation Salamis hits and kills them both. Monique breaks down at her brother's death. 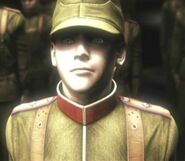 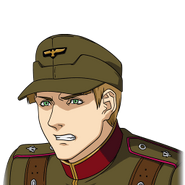 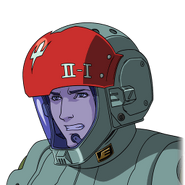 Retrieved from "https://gundam.fandom.com/wiki/Erwin_Cadillac?oldid=482955"
Community content is available under CC-BY-SA unless otherwise noted.