As captain of the elite Royal Guards unit, Manthfield was assigned to Gihren Zabi's defense headquarters at Side 3. His Zaku II High Mobility Type carries the Zeon Home Defense Corps' griffon emblem. He was subsequently transferred to A Baoa Qu to aid in its defense. Manthfield was credited with 156 enemy MS shot down and 3 ships destroyed. He was the fourth highest ranking Zeon ace of the One Year War, behind Johnny Ridden, Nordit Bauer and Breniss Ox. 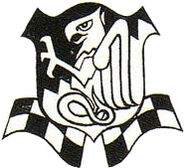 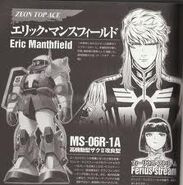