The Epyon Kaiser is a mobile suit based on the OZ-13MS Gundam Epyon appearing in an issue of Model Graphix magazine.

A segmented whip-like projected chain housed in Epyon's shield. Deactivated, it can be used to trip or entangle an opponent. When activated, the material becomes super-heated, allowing it to cut and burn through armor.

The main weapon of the epyon, connected directly to the suit's powerplant as opposed to running on its own internal power source, allowing its length and intensity to be adjusted considerably to cut through even heavily armored mobile suits like the Virgo

A search eye for used for combat, of the same type used by the Shenlong Gundam. It also gathers data that the cameras and antennas cannot.

Treize had a modified version of the deadly ZERO System installed in Epyon's cockpit. The system operated the same as the one in the XXXG-00W0 Wing Gundam Zero, but Epyon's had the pilot wear a special helmet on their head.

The Epyon Kaiser is more of a silly gag than anything else, Epyon Kaiser bears the color scheme and faceplate of the title robot from 1990's Brave Exkaiser. Kunio Okawara did the mecha designs for both Exkaiser and Gundam Wing, and contributed this combined design to the Gundam WARS magazine for a laugh. 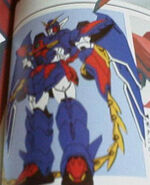 Retrieved from "https://gundam.fandom.com/wiki/Epyon_Kaiser?oldid=347406"
Community content is available under CC-BY-SA unless otherwise noted.