The Epsy Gundam (aka Epsilon Gundam or ε Gundam) was a prototype mobile suit, it was featured in the original design series Gundam Wars I: Project Z. It was designed by Masahiro Koda.

The Epsy Gundam was an obscure project developed in an attempt to create a mobile suit capable of Interplanetary travel to attack and destroy enemy fleets outside the combat range of allied ships. The design effort was carried out in a joint venture between Anaheim Electronics and AEUG. Designed around the same time period as the MSN-001 Delta Gundam, it's most noteworthy feature was a relatively new type of nuclear propulsion system, Nuclear Pulse Propulsion, whose concept was to utilize small directional nuclear explosives to "push" the mobile suit across space. Theoretically, the thrust produced from the system were in the millions of tons, which would allow the Epsy Gundam an incredible operational range. This method is also one of the techniques used for moving around large asteroids like 5th Luna. The Gundarium Epsilon alloy was developed over the course of the project, due to the rigors (shock, radiation, etc.) the Epsy Gundam had to withstand because of its propulsion system.

Although the system appeared to be entirely workable, the project is ultimately canceled, and it is speculated that idea conflicts and confusion within the design team (possibly due to the sheer complexity of the propulsion system), and the Espy Gundam remained in the end as a paper plan. The Espy Project was considered a failure for Anaheim Electronics, and the fact the company moved into the trend of variable (transformable) mobile suits ensured that no successor to the Epsy Gundam would be developed. 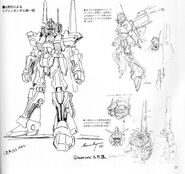 Retrieved from "https://gundam.fandom.com/wiki/Epsy_Gundam?oldid=347405"
Community content is available under CC-BY-SA unless otherwise noted.